Terrifying footage of COVID patients who, according to their families, were abandoned by doctors to die without oxygen, locked up in India, has been disclosed.

Terrifying footage of COVID patients who, according to their families, were abandoned by doctors to die without oxygen, locked up in India, has been disclosed. 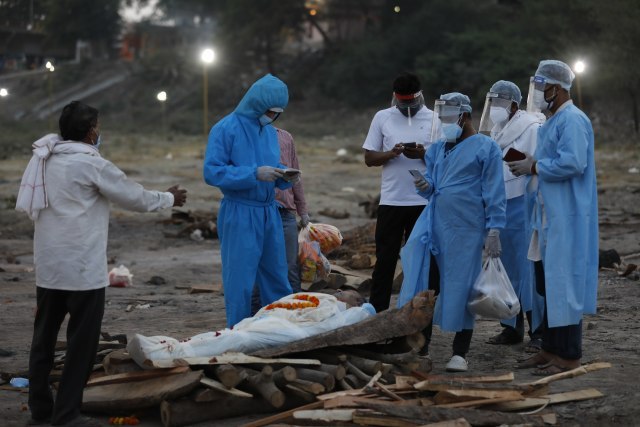 The tragic scene took place at the Kriti Hospital, a private clinic near New Delhi, last week after the families of the patients were told that the hospital was running out of oxygen, "Blic" writes.

Relatives, who paid more than a thousand dollars a day for a bed, said they came to the hospital, but found the patients abandoned and the intensive care unit locked. When the door was finally opened, it was established that the patients had died.

6 patients died in Kriti Hospital Gurgaon due to lack of oxygen on April 30, Director of the hospital says he spoke to every Govt official about oxygen shortage but no one responded.

Who is to be held responsible for the deaths India is seeing daily due to lack of Oxygen? pic.twitter.com/AxjItvLbwu

Police had to react when the relatives of the victims found the medical staff hiding in the canteen and threatened to attack them.

As the video of the tragedy went viral this week, police said that the institution is not authorized to treat patients with COVID and that an investigation is underway.

Kriti Hospital in Gurgaon has 50 beds for patients with COVID, and according to doctors, those who died were between 40 and 80 years old.

The hospital management confirmed that the doctors and staff were temporarily "hiding".

"Fearing the loss of their lives, they hid in the canteen so that patients' families would not attack them. However, the doctors and staff resumed their duties soon upon the arrival of the police," a hospital spokesman said.

Hospital director Swati Rathore said family members had been warned to "transfer their patients" due to the oxygen crisis.

"We had informed the relatives of the patients to shift their patients due to the oxygen crisis. But no help came and there were six casualties around 11 pm," Dr Rathore said.

"Despite numerous requests, no one came before the patients died," she said.

It is just the latest shocking scene coming from India, which is hit by the worst second pandemic wave in the world. A record number of deaths were recorded in India on Saturday, and for the third day in a row, the number of newly infected is higher than 400.000. Medical experts say that the actual data could be five to ten times higher than the official ones.

India's main opposition politician, Raul Gandhi, said that the second wave in that country was "a threat to the whole world" and that it should be brought under control urgently.

Gandhi warns that India's huge and genetically diverse population provides "fertile ground" to mutate into more contagious and deadly forms, causing devastation not only within borders but also around the world.

Indian Prime Minister Narendra Modi has so far resisted calls to declare another national lockdown, fearing economic collapse. Instead, he let states decide on their own measures.

But a growing chorus of politicians, medical experts and judges warns that he is running out of options as the country's healthcare system has reached a tipping point.