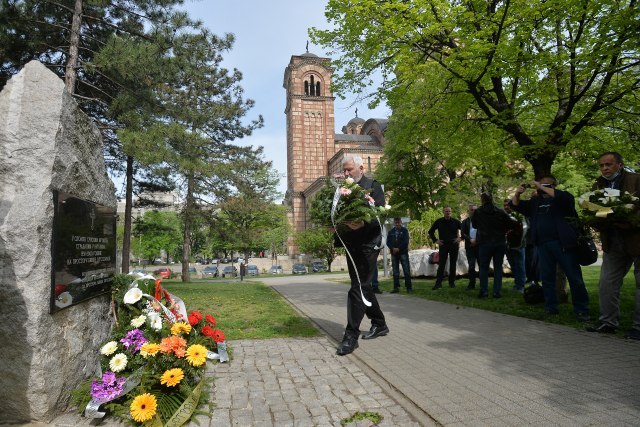 In 36 hours, 15.000 Serbs were expelled from Western Slavonia, which was part of the then Republika Srpska Krajina and under UN protection, while 283 Serbs were killed.

More than 16.000 members of the Croatian armed forces marched on Western Slavonia on May 1, with about 15.000 inhabitants and 4.000 soldiers.

According to the Veritas Documentation and Information Center, the UN protection forces, warned in time by the Croatian generals, withdrew to safe places, leaving their protégés at the mercy of the aggressor.

The people of western Slavonia, remembering Jasenovac from 1941, and Pakracka Poljana from 1991, started an exodus towards Srpska. On the way to the "bridge of salvation" to the Sava River, they were overtaken by plane bombs, helicopter shells, cannon grenades and sniper bullets, it is said in the statement. According to "Veritas", 283 people were killed and disappeared in that operation, including 114 civilians and 11 militiamen. Among the victims, there were 56 women, 8 people under the age of 14 and 75 over the age of 60. Of the total number of victims, the fate of 162 people has been clarified so far. 121 people still remain missing, including 52 civilians and 24 women.

Of the 148 exhumed remains from group graves, 114 have been identified so far. And when exhumed and unidentified (34) are identified, grave sites for 87 remains remain unknown.

In that operation, two villages with a predominantly Serb population suffered the most - Medari with 22 victims, including 11 women and three children, and Paklenica with 20 victims.

Veritas states that about 1.450 members of the Serbian Army of Krajina were captured, most with the assistance of UN protection forces. Before the national courts of Croatia, Serbia and Bosnia and Herzegovina, several criminal proceedings were initiated against members of the Croatian Armed Forces for crimes against Serbs in that action, which did not go beyond the pre-criminal phase, Veritas points out.

"We were expelled only because we are Serbs"

Today, associations of refugees and displaced persons from Croatia laid wreaths in Tashmajdan Park in Belgrade, thus paying tribute to the victims.

The president of the "Zavicaj" Association, Nenad Abramovic, pointed out that "the consequence of the action was the complete ethnic cleansing of the Serbian people from Western Slavonia, which began in 1991 with the "Swath" operation, in which about 4.000 Serbs were expelled." According to him, it is necessary to remember those events and pass on the truth about the suffering of the Serbian people to the younger generations, because if that is not done, the crime will be repeated.

He welcomed the fact that the state of Serbia has been investing a lot in the culture of remembrance in the last few years, and that Serbs have turned to themselves.

"If we forget ourselves, others will not support us", Abramovic said, adding that those associations would continue to mark the suffering of the Serbian people, which he said were too many in the 20th century.

On behalf of the "Red Berets" Special Operations Unit, Milorad Munikravić says that "Flash" was a terrorist operation by which Croatia, with the help of NATO, attacked the UN protected zone and committed, he points out, a horrible crime. "Many civilians were killed then because they were the target of the attack," Munikravic said.

The president of the Association of Krajina Fighters, Milan Gaćeša, assessed that it was an Ustasha action and stated that many years have passed, and that, unfortunately, the same story is still being told.

However, he notes that it is good that it is marked every year, so that the people know what happened and why the Serbs were expelled from Western Slavonia.

"We were expelled only because we are Serbs," Gaćeša added. The president of the RAS Academy, Alek Racic, stated that the "Flash" operation is a continuation of the genocide in Croatia against the Serbian people from the Second World War.

"These things must not be forgotten, more events are needed during the year that will serve as reminiscence of the Ustasha genocide. All crimes in Croatia against the Serbian, Jewish and Roma people need to be investigated to the end in order to establish historical relations", said Racic.

"No one was held accountable for the crimes"

The Serbian National Council (SNV) points out that 22 Serb civilians were killed during the operation in Medari, and that no one was held accountable or charged with the crime.

SNV reminds that the attack started on May 1, 1995, at around 5.30 am, from three directions on the territory under the then protection of the United Nations peacekeeping forces, where, as it is stated, 15.000 Serbs lived.

A SNV statement claims that Serb civilians were killed during the operation, that refugees were attacked, and that between 2.000 and 3.000 Serbs remained in the area after the operation, and almost the entire Serb population left the area.

It is added that on the first day of Operation Flash, members of the Croatian army entered the village of Medari, which was located along the demarcation line, and that they allegedly committed war crimes against civilians they found in their homes.

According to a 2002 report of the Croatian Helsinki Committee for Human Rights (HHO), 22 of the 24 Serb civilians found by the army in the village were killed, and two girls were rescued because they were recognized and protected by a Croatian soldier.

Twelve women were killed, and seven members of the Vukovic family were among the victims, including a seven-year-old and an eight-year-old girl and an 11-year-old boy.

"The oldest victim was 88 years old. The residents of Medari believed that in the event of a military operation by the Croatian army, they would be protected by UN peacekeepers whose base was in the immediate vicinity of the village", the SNV said in a statement.

It is added that in mid-2010, the exhumation of the remains of 28 people from the common grave in the area of the Trnava cemetery was completed.

By the spring of 2012, the Institute for Forensic Medicine had identified 14 Medari residents killed on May 1, 1995, including all members of the Vukovic family.