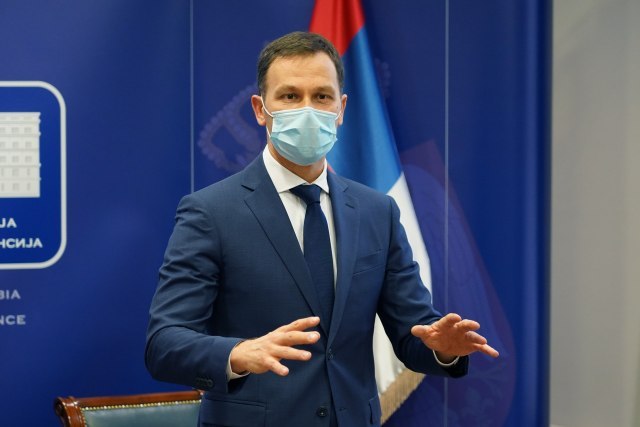 Mr. Mali reminded that starting midnight today, citizens in Serbia can apply for the financial assistance in the amount of 60 euro.

It was clarified the application is done through the following link: idp.trezor.gov.rs.

Also, a leaflet with relevant information was published in all daily newspapers, for citizens to find information about this type of financial assistance and find answers to the frequently asked questions.

"Everything is going much faster than last year when we had a payment of 100 euros," reporters were told.

Earlier, the advisor to the Minister of Finance, Ana Jovic, explaining the registration dynamics, reminded that from May 5, citizens will also be able to apply through the call center.

Ms. Jovic also mentioned that the registration will last until May 15.

"Last year, when there was an application for 100 euros financial assistance, 3,900 people applied in the first half-hour, and tonight over 20,000 people - so five times more. We expect to exceed 500,000 applicants by noon, and the first million by the end of the day," he announced.

He mentioned that the senior citizens, users of social welfare assistance and those under the administration for criminal sanctions do not apply for assistance.

"The money will hit their accounts automatically," the minister pointed out.

Mr. Mali mentioned that the citizens can register for this financial assistance until May 15, and that a call center will become operational on May 5, for those who want to register by phone.

He added that citizens apply only once, and that they will receive another 30 euros in November.

As early as May 6, all 1.7 million senior citizens will be paid, and on May 7, all social welfare beneficiaries and those under administration for criminal sanctions.

"On May 12, we will start the payoff for all other citizens. Let say that May 20 is the date to pay everything," he announced.

Mr. Mali reminded that on May 10, the second minimum wage is going to be paid, as a part of the third package of financial assistance to the economy.

"In June, we will pay an additional 60 euros from the budget for all the unemployed, and our oldest fellow citizens will receive another 50 euros in September," Mali pointed out.

The Minister of Finance says that the money has already been provided and that in this way the solemnity and strength and of the state is being shown.

"We have 240 billion available, we are completely stable, liquid, so we want to help the citizens and the economy. We were criticized for having a surplus for four years in a row and now what is wrong - helping the citizens? We want to help reduce the consequences of the pandemics," Mr. Mali stressed.

This type of financial assistance is part of the third package of state assistance in fighting the current pandemic.

All adult citizens of Serbia who have permanent residence on the territory of Serbia and a valid ID card as of April 23, i.e., on the day the Bill on Provisional Register of Adult Citizens of Serbia entered into force, are entitled to this state financial assistance in the amount of 60 euros, or two 30 euros installments.

When asked about the possible indebtedness for helping citizens and the economy, the Minister pointed out that the criticism did not correspond to the truth, because the state decided to help since it became stable and strong, with a four-year budget surplus.

"Salaries were increased in 2020, during the peak of the pandemic by 7.7 percent in real terms compared to 2019. We procured vaccines, we built two Covid hospitals in record time and President Aleksandar Vucic is laying the foundation stone today for the third Covid hospital. What if we hadn't helped, if people had lost their jobs, if the state hadn't taken on the load of the crisis, if we had closed factories, how many years would it take for people to get their jobs again, for factories to reopen? This is a matter of responsible economic policy, and thanks to fiscal consolidation, the reforms started in 2014 by president Vucic, we have created enough reserves to be able to react in times of crisis," Mali explained.

The Minister reminded that the state set aside 257 billion dinars for the third financial package, and 704 billion dinars last year for two packages, totaling the state allocation of about 8 billion euros to help citizens and the economy.

"That is why we have preserved our economic system and we say that we will have six percent GDP growth this year. The IMF says it will be five, and we say it will be six, but with absolute maintenance of stability, as written in the budget rebalancing. "The debt will not exceed 60 percent, despite large allocations to help the economy. On the other hand, we have never had more money in the budget for investments," said the Minister.

A total of as many as eight highways will be under construction by the end of the year, that investments will include hospitals, a new vaccine factory, and ecology.

"We want to show that we are stable and strong and to confirm that image of Serbia winning in the field of economy and vaccination; based on that we build even stronger growth," Mr. Mali noted.

The Minister of Finance also referred to the Draft Law on the Metro, which will soon appear before the Government of Serbia, which primarily refers to the construction and management of the future metro system.

"At the end of the year, as promised, we will commence with the construction of the first metro line in Belgrade. That project is a part of the 'Serbia 2025' program, and we have allocated that money in the budget rebalancing the MPs adopted," he explained.