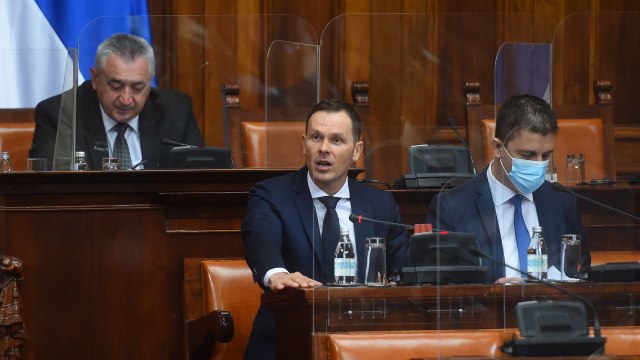 Presenting the Draft version of the Law on Electronic Invoicing, Mr. Mali said that it represents a systemic law that changes the way the economy will function, following the example of digital invoices, which are already being implemented in the European Union and which should contribute to transparency and legal security in business in general.

According to the Minister of Fitnance, the proposed version of the Law implies that it will gradually introduce the obligation to all business entities to issue and receive electronic invoices that are in the VAT system from January 1, 2022, to January 1, 2023.

He pointed out that the use of the e-invoice system will be free of charge, but for those economic entities that would like to use IT intermediaries, such cooperation will be allowed, but their relationship will be governed by a mutual agreement, not by law.

He stated that from July 1, 2022, private sector entities will be trained, that is, they must be trained to receive and store e-invoices from both the public and private entities.

"From January 1, 2023, the entire private sector will be obliged to receive and send e-invoices," Mali said.

The Minister said that it was a huge step forward for the Serbian economy, stating that there will be no more need for paper invoices and stamps.

Presently, the Minister stated, there are about four million invoices in the central register of invoices per annum, emphasizing that this process does not start scratch.

"Some 550 billion electronic invoices are issued and received per annum worldwide. This is not a process that we can sleep on, and it will also contribute in terms of transparency and legal security. We keep the pace with the world – we do everything the world does," said Mr. Mali.

When it comes to amendments to the Law on Terms of Settlement of Monetary Obligations in Commercial Transactions, July 1, 2021, instead of January 1, 2022 was prescribed as the kick-off date for e-invoices recording.

Explaining the changes to the Law on Insurance, Mr. Mali said that they are intended to solve something that should have been solved a long time ago, and that is the issue of social capital in insurance companies.

According to him, there is still social capital in certain insurance companies such as Dunav osiguranje or Triglav.

"The Law resolves the issue where state capital is converted into shares in the following way - 70 percent of that capital goes to the account of the Republic of Serbia, up to 25 percent to employees and former employees paid through free shares and five percent goes to the share fund except for Triglav Insurance, given that share of social capital there is 0.12 percent," said Mali.

He reminded that the Constitution does not recognize social property and that in this way the legal security of all those who do business with Dunav osiguranje will finally end and be completed, enabling them to improve their business.

As noted, the shares will contribute to the activity of the Belgrade Stock Exchange.

Regarding the Law on General Administrative Procedures, the Minister said that it is an important step forward, and that it is a register that represents a single portal with all the information used by the public services users.

"We expect to improve the position of our country on various lists measuring the availability of public administration services and eliminate the gap for corruption," said Mali.

The MPs will have the final say on all the proposed solutions.