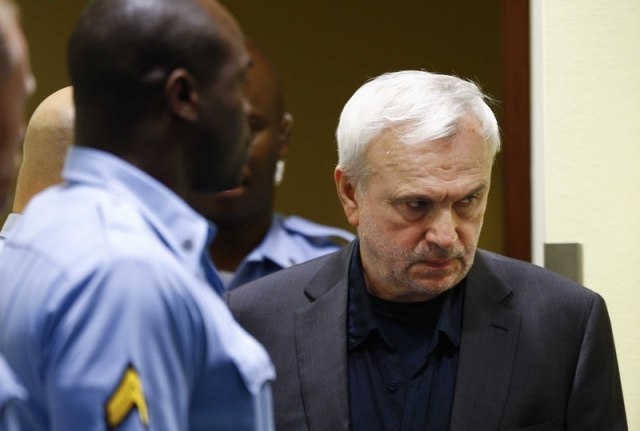 As a favor, the Central Intelligence Agency, as "Blic" further reports, took him on a study trip to the CIA headquarters in 1996, where he received a warmly welcome. American colleagues took him to a jazz session at the Blues Alley Club in Georgetown and drove him to the east coast of Maryland to duck hunting.

John Deutsch, the head of the CIA in those days, even presented him a 1937 Parker shotgun, a highly valued collector's item.

The Belgrade daily reminds that the cooperation between Stanisic and the CIA was also confirmed by Wayne Jordash, who was a lawyer to Mr. Stanisic, who stated in The Hague that Stanisic contacted the CIA in 1991 and that in 1993 he took the CIA operatives to the locations of mass graves in Bosnia.

Once Stanisic appeared before The Hague tribunal on charges of taking part in a joint criminal enterprise with Milosevic aimed at removing Bosnians and Croats from parts of Bosnia and Croatia in order to establish an ethnic Serbian state, the former Serbian Secret Service chief called on friends from CIA. And they extended their hand to him, the text states.

A secret document was submitted by the CIA to the Hague Tribunal, listing all of the merits of Mr. Stanisic, as a kind of confirmation of his "good role", with the condition that the document remains sealed.

William Lofgren, a retired CIA agent in Belgrade who was in charge of Stanisic explained that the CIA presented the file to show "that this allegedly evil person actually did many good things." The CIA refused to comment further on this document, and since the content of the document is confidential, the Hague tribunal considered it in a closed session.

Stanisic was described in the text published by "Los Angeles Times" as a key CIA person in Serbia.

"CIA agent William Lofgren required help. The CIA was blind after Yugoslavia disintegrated in the civil war. At the time, the war began in Bosnia. Milosevic was seen as a threat to European security, and the CIA was desperate to get any viable information. And during a midnight walk, two spies carved an unbreakable bond remaining a secret to this day: for eight years, Stanisic was the main CIA man in Belgrade," the Los Angeles Times wrote.

While he was in custody in the Hague, while in custody, Stanisic stated in a document compiled that he managed to "institutionalize cooperation with the US intelligence community despite the well-known poor relations between our two countries."

The "Los Angeles Times" wrote that Stanisic commanded a heap of more than two thousand people at the peak. He wore dark suits and sunglasses, like the Balkan James Bond. His nickname was Iceman. He joined Tito's Secret service in 1965, but never showed any inclination towards any ideology, not even towards nationalism. He had a rare talent for espionage.

"Stanisic was no ordinary intelligence officer. He was an intellectual, not a hardcore policeman. He was well educated and skilled, and he knew how to organize the secret service," Dobrica Cosic described him, a writer and former dissident, president of Serbia in 1992 and 1993.

Because of those skills Milosevic made Stanisic his first informant, despite the mistrust between the two.

A CIA agent serving in the region at the time told the Los Angeles Times that they assumed Stanisic was not naive, but that they had never seen evidence linking him to war crimes. Instead, they viewed him as a key ally in a situation where things could rapidly go south.

From the very beginning, Stanisic was determined to reinforce his relationship with the CIA. During one meeting with Lofgren, he handed him a pile of papers, including plans for shelters and other facilities built by Serbian companies in Iraq for Saddam Hussein. But Stanisic also drew the line. "He never took money from the CIA, he never worked with the Agency on specific tasks, and he never took any step that could be interpreted as a flagrant betrayal of Milosevic," the Los Angeles Times reported.

In their letter sent to The Hague, the CIA described efforts Stanisic made to ease some of the most explosive situations during the Bosnian war. In the spring of 1993, as the CIA claims, Stanisic pressured Ratko Mladic to stop shelling Sarajevo for at least a while.

Two years later, Stanisic helped in releasing 388 NATO soldiers. In his notes, Stanisic claims that he negotiated this release with the support of key people from the CIA. That same year, Stanisic intervened when captured French pilots were shot down.

Stanisic went with Milosevic to Dayton for peace talks, and then returned to Serbia to implement the most important parts of the peace agreement. It was up to Stanisic to convince the President of the Republic of Srpska, Radovan Karadzic, to resign from his position.

Stanisic helped the CIA to build a network of posts in Bosnia to monitor ceasefire on the ground. Doug Smith, head of the CIA station in Bosnia, recalls a meeting in Bosnia with Stanisic and a group of Serb officials from Bosnia, held in Belgrade.

Stanisic was deepening ties with the CIA and that became a source of conflict with Milosevic, who was worried that his first informant was plotting. In 1998, Stanisic was fired.

Today, Stanisic and Franko Simatovic Frenki, a former JSO commander, have been indicted before the Hague tribunal for participating in a joint criminal enterprise led by then-Serbian President Slobodan Milosevic for attempting to remove Bosnians and Croats from parts of Bosnia and Croatia to establish an ethnic clean Serbian state.

After the first instance trial, the Hague Tribunal acquitted Stanisic and Simatovic in 2013, but the Appeals Chamber accepted the Prosecution's appeal in 2015 and ordered a retrial on the same indictment due to irregularities in the procedure. For the first time in the history of that court, the Appeals Panel decided to completely rerun a trial.

A new trial began in the summer of 2017, while the verdict, according to earlier announcements, could be expected in May this year.

Stanisic and Simatovic were arrested by Serbian authorities in 2003. Stanisic has been temporarily released due to illness and resides in Belgrade since July 2017. Neither of them attended the closing arguments at the trial held in the Hague.