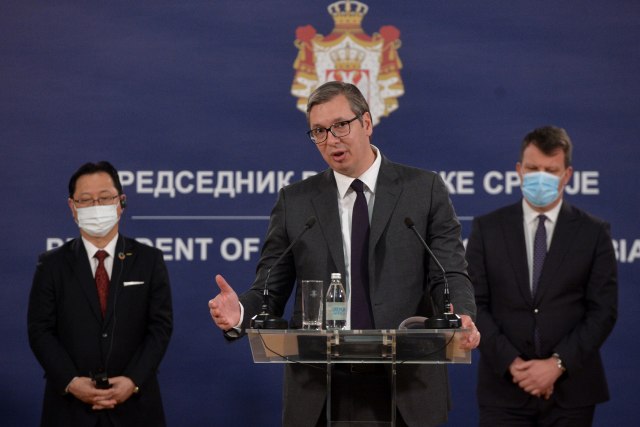 "This means a lot to us since we have been working for this for years and we are happy because we know how important this is for Serbia. This project is of fundamental importance and will change our country," Vucic said.

"Besides the factory, Nidec will also open an R&D center in Novi Sad. That means that more technological, mechanical, and electrical engineering faculties at universities in Serbia will be needed," he pointed out.

"We have two burning issues as our main goal - to defeat the coronavirus pandemic, and to have a significant growth - for that, one of the basic pillars is to have as many direct investments as possible," he added.

Nidec will employ 480 people and their salaries will be significantly higher than the average in Serbia, said the President of Serbia.

According to him, the arrival of Nidec in Serbia shows that we are a good destination for investments because the Japanese choose where to invest.

"Novi Sad will be the center for the production of power steering motors...", said Vucic.

"We prayed for Central Serbia and other locations, but it is important for them to be close to the university center. We give special incentives for coming to poorer parts of the country," he reminded.

The President of Serbia posted a photo on Instagram with only four words. "An important day for Serbia", was written in the description of the official profile photo.

The mayor of Novi Sad, Milos Vucevic, said that Nidec Corporation is arriving in Novi Sad.

"That means a great number of new jobs for Novi Sad and the surrounding areas, Serbia raises the quality bar in the economic league and becomes attractive to foreign investments. For Novi Sad, it means that we will have more money to build roads, bridges, schools," Vucevic said.

Executive director of Nidec Corporation Jun Seki said that he was pleased to officially announce the launch of this new business in Serbia.

"We have decided to build a new production plant and a scientific and development center in Serbia. The support we have received from the Government of Serbia was exceptional," said June Seki.

"We have 20 research and development and 28 production centers and with some 14,000 employees. We are considering producing traction motor systems as well. Our plan is to invest some 1.5 bn euros in growth in Europe, most of it in Serbia. This factory will be the best Nidec Group factory in the world," he pointed out.

"This is going to be the largest Japanese investment in Serbia and a driver for cooperation between Japan and Serbia in the region," said the Ambassador of Japan to Serbia, H.E. Katsumata Takahiko.

The Nidec Corporation plans to build a factory in Novi Sad for propulsion engines for electric vehicles.

Ms. Andjelka Atanaskovic Minister of the Economy also attended the meeting with the executive director of Nidec Corporation Jun Seki.

After the meeting, the Framework Agreement between the Ministry of Economy and the Japanese Nidec Corporation was exchanged.

The Japanese group opened its office in Novi Sad's SPENS yesterday, with the preparations for the construction of the factory in full swing.

As previously announced, Nidec plans to bring an investment worth two billion euros to Serbia, and production should start in some 18 months.

It was also announced that the factory will produce components for the automotive industry and will employ 300 people in the first phase and that it will cover 26,000 square meters.

An agreement on strategic partnership between Nidec Corporation and the Faculty of Technical Sciences in Novi Sad was signed in Novi Sad yesterday.

In this way, through industrial and academic cooperation, Nidec will be actively involved in the technological exchange of the two countries.

The main goal of the Nidec factory in Novi Sad is to become the central base for the Group's production activities in Eastern Europe and the company's headquarters, as well as for the companies within the Nidec group, of which several also have plans to come to Serbia.

This investment is in line with the "Initiative for Cooperation with the Western Balkans", on which the Japanese government is currently working in relation to our country and other regions and the Japanese company has received great support from both the Japanese and Serbian governments.

The demand for highly efficient brushless DC electric motors and related products for vehicles and home appliances is increasing in Europe due to stringent environmental regulations and regulations for reducing CO2 emissions for passenger vehicles in European countries.

The City of Novi Sad will earn around one billion dinars based on the purchase and sale of construction land alone.

Nidec plans to another 16 hectares of land in Novi Sad area by 2026 for future investment plans.

Nidec was founded in 1973 in the Japanese city of Kyoto and today is the world leader in the production of all types of electric motors with the largest share in the global market for small high speed spindle motors powering hard disk drives.

Nidec runs its operations in more than 40 countries, with approximately 340 companies in the group and employs more than 120,000 people worldwide.