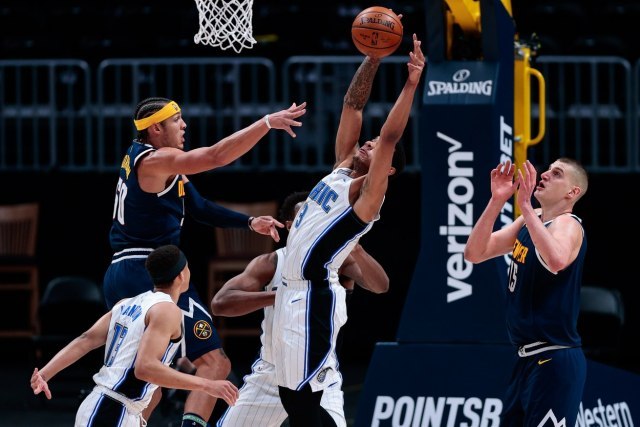 After adjusting to Denver's game in the first three matches, with 24 points scored in the fourth match, he was already the most efficient Nugget.

And all that against the team he played until recently, Orlando Magic.

Gordon scored 24 points with great percentages (10/13), and had 7 boards completed with two assists and blocks each.

I told him, sometimes you will score two points, and sometimes 20 or more. I think we have a lot of weapons now. We are dangerous in many aspects. It's good to have him on the court. He gives us an extra dimension," said Nikola Jokic.

For the Nuggets fans it is even more important that these two have built a great cooperation, with Nikola coming short to complete another triple-double (17 points, 16 assists, 9 boards).

Jokic became the center with the most games with at least 10 assists, and he dimed most of his 16 assists against Magic to Gordon.

"Since he has been in the NBA, Jokic has been assisting. I hope that I will make it easier for him and that I will return the favor and find him for easy baskets as well," said Gordon. With this victory over Orlando, Denver presently stands at 31-18.

This was the fifth consecutive victory for the Nuggets, and the ninth in the last 11 matches, which led them to the fourth position in the Western Conference, leaving Los Angeles Lakers to trail by half a victory.

The Nuggets trail by two victories the third-placed Clippers, with the same number of matches played, and three and a half more than the second-placed Phoenix Suns.