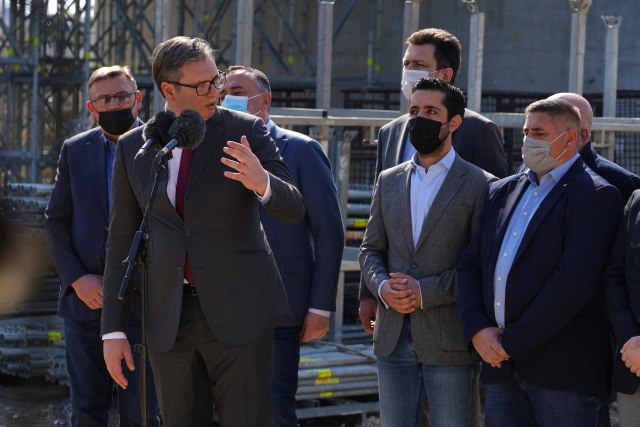 Addressing the contractors, Mr. Vucic asked them to complete Ruma-Sabac by the end of September 2023, and Sabac-Loznica by the end of October 2024.

"We have good cooperation with the relevant ministry and the city government, the progress is better than planned and we expect to finish at least six months before the deadline," the report was given to Mr. Vucic by a construction company representative.

"We have problems in some other sections, which need to be solved by 2024," Vucic said. “I know Azvirt can do it,” he added.

The bridge is 1350 meters long, and the central structure is 605 meters.

"This project is completely financed from the budgetary sources, we did not take any loans, everything that Sabac and Ruma will get, and not only them but also Belgrade and Loznica," the President of Serbia pointed out. "We paid 40 million here, 31 percent of the total for this section with the bridge," he said. This will make it much easier for many people to get to the Drina, and also to go to many other parts of the country, he added.

"We didn't scrutinize the construction deadline since the contractors always try to get a year or two of breathing space. But I think they are fair, Azvirt is a great company." He said that they agreed to cut the deadlines by fifteen months. "We will save lives of people who live and travel in this area and traffic jams in Hrtkovci, Jarak ..."

"This way, we hope to see and attract new investors," Vucic emphasized. "They only want to come if they see a good road infrastructure," he added.

"It will take only 40 minutes of normal driving to get from Belgrade to Sabac,” the president said.

"If you take a look at the map of Serbia, new roads are springing up for us like blood vessels, for our country, people and investors who are coming," said Vucic. "Now we will be able to talk about increasing the tourist capacity on this side of the Drina bank," he said.

"The price of land will go up here," said the President of Serbia. He stated that people will start buying weekend houses and everything else, knowing that they can get to Sabac in 35-40 minutes from Belgrade."

"Today, we are here, not so far from Sabac on a magnificent construction site," said Vucic. The bridge is fifteen hundred meters long, and this is the second road bridge for the people of Sabac.

In less than two and a half years, the highway will go from Belgrade to Sabac, he said. We have already paid 40 million euros without borrowing money and taking loans, Vucic pointed out.

"Once Serbia gets interconnected with highways, it will become a completely different country," he added, adding that by 2025, Serbia will be "unrecognizable."

"We will also try to solve the sewage and wastewater problems, we will build a natural gas pipeline all over and take care of the environment; we will also bring more investors," said the President of Serbia.

The entourage on this tour included the Minister of Construction Tomislav Momirovic, the director of the Corridor of Serbia Aleksandar Antic, the acting Director of Roads of Serbia Zoran Drobnjak.

This construction will include 28 pillars and will be a little more than 1.3 kilometers long.

Ruma – Loznica section of the highway will be 77 kilometers long, and of great importance for the future economic development of this part of Serbia.

The contractual price of the works is 467.5 million euros and the works are being performed by the Azerbaijani company Azvirt in a consortium with domestic subcontractors.

In his earlier visit to the construction site in February this year, Antic stated that all necessary preparations would be completed by the end of March so that the contractor could kick-off the works on the future route from Ruma to Sabac.