WASHINGTON DC -- Serbian Ambassador to Washington Marko Djurić says exclusively for B92.net that the inauguration of US President Joe Biden was very dignified.

WASHINGTON DC -- Serbian Ambassador to Washington Marko Djurić says exclusively for B92.net that the inauguration of US President Joe Biden was very dignified. 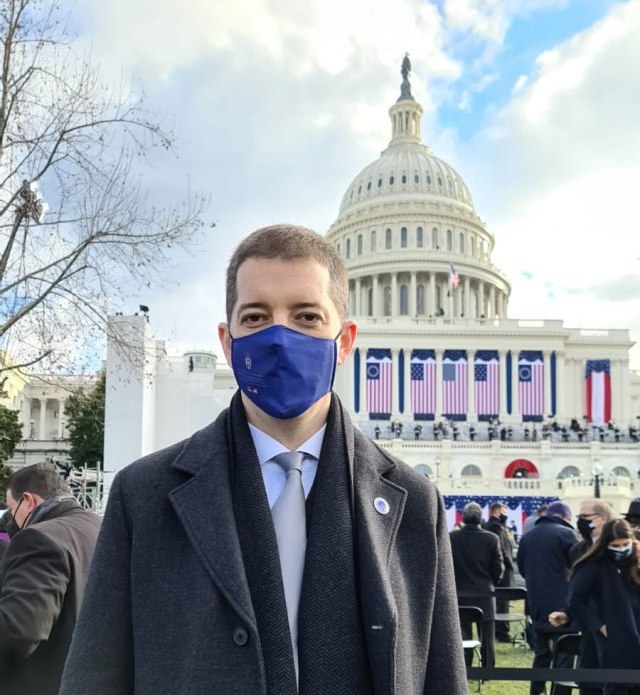 "The inauguration itself was very dignified and completely peaceful. Considering that it took place only two weeks after the scenes of violence in the Congress, the inauguration was marked by an incomparably larger presence of representatives of practically all security forces," Djurić, who represented Serbia at the ceremony, told our portal.

It is estimated that nearly thirty thousand police officers, soldiers, members of the National Guard, the Secret Service, the FBI and other bodies were mobilized in the days immediately before and during the ceremony.

"The wider center of Washington was blocked by multiple rings of heavily armed special forces in war equipment in order to prevent possible new unpleasant surprises," Djurić pointed out.

When asked what the ceremony looked like due to the large number of members of the security forces, Djurić said that it was extremely well organized.

"The ceremony itself is in the organizational sense a supreme example of exceptional professionalism and commitment of the competent protocol structures and, even with the necessary and previously unusual epidemiological and security measures, it took place in a solemn spirit and at the level expected from one of the oldest and most monitored global ceremonies", he states.

According to Djurić, despite the riots in which protesters and supporters of former US President Donald Trump broke into the Capitol building, in Washington itself, one of the curiosities of which was almost unanimous electoral support for the new president in November, there are no indications of any serious daily functional problems.

"Throughout the United States, life is normal, without unrest and tensions, not counting the challenges posed by combating COVID-19, so the differences in relation to strategic topics are left to political institutions," says Djurić.

"Having in mind the long-term acquaintance and mutual respect between President Vučić and President Biden, this very fact is a great resource for our country. I personally attended their earlier meetings and talks, which always took place in a great atmosphere, an atmosphere of mutual respect and appreciation. This is a much more intensive and long-lasting cooperation than was the case with any previous president of the United States, which has established another solid foundation for further improvement of our relations at all levels," he said.

Speaking about how much he had accomplished as the recently elected ambassador of Serbia to the United States, Djurić says that he has been in that position for only a month, but that he and his team are working intensively every day to strengthen relations between the two countries.

"My days are filled with meetings, talks and contacts, not only with officials of the State Department, Congress and the National Security Council, but also with people from the wider political and economic spectrum, public life, civil society, academia and culture, as well as with the Serbian community and associations of our diaspora", he said.

He adds that he will fight for every opportunity to intensify contacts with the highest American officials.

"I will do my best to improve the position of our country in local circles of power, to affirm our national interests while improving overall relations and strengthening ties with the United States, primarily in domains that are felt in everyday life of ordinary people, such as economy, education, science, thus building positions for greater political understanding", Djuric underlined.

He notes that during 2021, when we mark 140 years of mutual diplomatic relations, "we are looking for inspiration in the historical periods of the alliance, as opposed to negative and unpleasant episodes, believing that the period of the best possible relations between Serbia and the USA is yet to come."

"We will certainly try to present Serbia in a new, different and unique way," Djurić concluded for B92.net.

Excitement rising! Honored to represent Serbia with my wife Andrijana, and to attend the #Inauguration2021!!! 🇷🇸🇺🇸#Inauguration #InaugurationDay2021 pic.twitter.com/qLM8PAMjqc