Emergency meeting; Chaos in Germany, they are bringing beds to the airports

The discovery of a new strain of coronavirus in Great Britain and its rapid spread has frightened many European countries, which introduced measures on Sunday.

Emergency meeting; Chaos in Germany, they are bringing beds to the airports

The discovery of a new strain of coronavirus in Great Britain and its rapid spread has frightened many European countries, which introduced measures on Sunday. 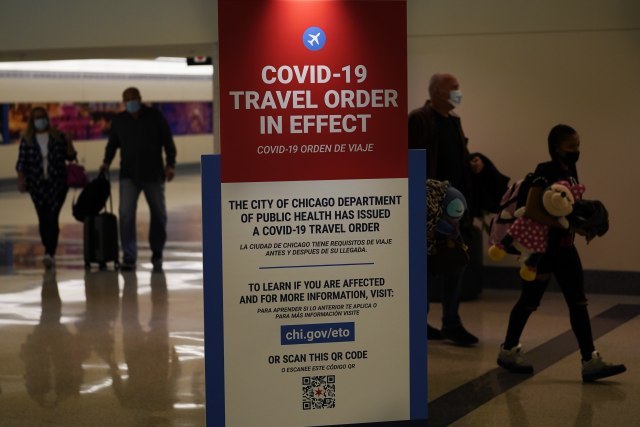 Many countries have already made decisions on the temporary suspension of air traffic with the United Kingdom.

Of particular concern was the warning by British Health Minister Matt Hancock that "a new strain of the virus is out of control".

Germany has also introduced new measures for travelers from Great Britain. Passengers who travel to Germany by plane from Great Britain until the ban comes into force will be offered a coronavirus test, which is mandatory for foreign citizens, and the existing rules on quarantine of the provinces will be pointed out.

"We know what inconveniences are caused to passengers due to these measures, especially during Christmas trips. All partners are working to enable safe entry into the country, and at the same time not to cause major problems to passengers," the statement reads. The new measure caused chaos at German airports, because passengers were not allowed to leave the airport until they received the test result.

At some airports, beds have been set up in "transit", according to media reports.

Lists of countries that imposed a ban on flights from Great Britain due to the appearance of a new, more contagious strain of coronavirus, were joined by Turkey and Switzerland on Sunday, the BBC reported.

Just hours after British Prime Minister Boris Johnson announced that Christmas shopping and gatherings in the south of England must be postponed due to the appearance of "a new strain of coronavirus that is spreading very fast", the ban was imposed by France, Germany, Italy, the Netherlands, Belgium, Austria, Ireland and Bulgaria, and Croatia announced a 48-hour suspension, the AP reported. The Czech Republic has introduced a strict quarantine measure for all passengers arriving from the UK and, like Romania, has announced an imminent ban on all flights from the "Island", while the Swedish government has announced that it will introduce "travel restrictions to the UK", The Guardian reports.

The French government announced that as of tonight, starting at 11 pm, it has suspended the road transport of goods from Great Britain to France for 48 hours.

Outside the EU, a ban on flights from Great Britain was also introduced by Israel, Iran and El Salvador, and Morocco announced the suspension of air traffic. Also, Saudi Arabia suspended all international flights due to the new type of COVID-19, the Ministry of Internal Affairs announced, and CNN reported, referring to the national state agency.

Today, a new emergency meeting of the leaders of the EU member states is expected due to Great Britain, that is, a new strain of the virus that appeared in the east of England.

Also, an emergency meeting of the Crisis Staff was scheduled by the British Prime Minister Boris Johnson, at which international traffic to and from Great Britain will be discussed.

According to the latest information from this morning, Canada will also suspend flights from Great Britain. Argentina and Chile will do the same.

The ban came into force at 6.00 Central European Time and will last for at least 72 hours, CNN reported. Canadian Prime Minister Justin Trudy confirmed this news on Twitter, saying that everything had been done to protect Canadians across the country from a new strain of the virus circulating in southeastern England and London. Canada's public health service said that although more information was needed on the new type of COVID-19, "the decision to suspend flights from Britain for commercial and private flights will be valid for 72 hours."

The Ministry of Internal Affairs of Argentina announced that the last flight before the suspension from Great Britain is planned for Buenos Aires this morning according to local time, Reuters reports. Passengers and crew from that flight will have to go to a seven-day quarantine. Chilean authorities have announced that foreigners without residence who have been in Great Britain for the last 14 days will be banned from entering the country from Tuesday at midnight for the next 14 days.