BELGRADE -- President of Serbia, Aleksandar Vučić, said that another difficult day is expected today, especially in terms of the number of dead.

BELGRADE -- President of Serbia, Aleksandar Vučić, said that another difficult day is expected today, especially in terms of the number of dead. 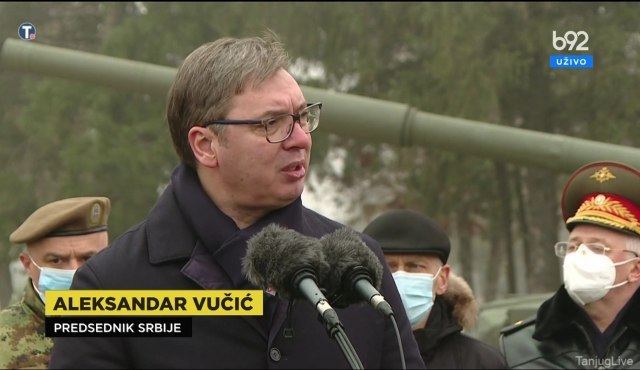 As he said, Serbia is trying to maintain its health system.

He pointed out that a large number of young doctors have turned in to work in new hospitals and help combating coronavirus.

"I hope that we will always be able to say that our doctors and medical staff worked extremely better than others on the continent, and you can see that," Vucic said.

He pointed out that the situation in the region is much worse.

"Bosnia and Herzegovina has more than 1.000 dead, and it is smaller than Serbia," the president said.

He pointed out that this is a terrible disease, but that our system fights even in difficult conditions.

Vučić pointed out that we have proportionally fewer dead in relation to the number of inhabitants because we test a lot on a daily basis.

"I am interested in how many lives we saved, and how many people died, and that is what everyone else is interested in, not what is formally reported. We see the enemy in the coronavirus and we will fight hard against it," Vucic said.

President of Serbia, Aleksandar Vučić, said that the Serbian health care system did not collapse, as some claim, but that it was in a difficult situation and that it was progressing nonetheless, thanks to health heroes who help their country, unlike others who only look for the opportunity to do harm.

"Our health care system is in a difficult and complicated situation, but it is progressing every day and giving birth to heroes every day."

Vučić thanked all those people who want to help their country, instead of looking at how to destroy their health system and state.