Brnabic: Next measure is a ban on movement; children are the safest in schools VIDEO

BELGRADE -- The Prime Minister of Serbia, Ana Brnabić, said that there are 15 days left until December 1, when it will be decided on additional tightening of measures.

Brnabic: Next measure is a ban on movement; children are the safest in schools VIDEO

BELGRADE -- The Prime Minister of Serbia, Ana Brnabić, said that there are 15 days left until December 1, when it will be decided on additional tightening of measures. 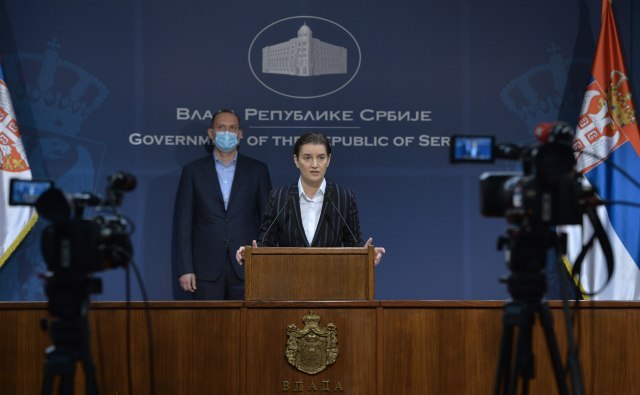 Brnabic stated that Serbia is a country that has one of the lowest mortality rates.

"We have one of the lowest mortality rates not only in Europe but also in the world. Our mortality is now 1.3%, in the region and Europe, only a few countries are below us," she pointed out.

As she said, Serbia is far from the worst scenarios that are happening in Europe. She added that we have enough drugs, respirators, oxygen, as well as tests.
She also referred to testing potentially infected people. ﻿

"The next restrictive measure we have left is a ban on movement, but we are not for that. We know that it is the next measure, but we are not even thinking about it because we hope that these measures will give results," she said.

"With the Minister of Health we analyzed the situation in hospitals, with the President we further analyzed the state of the economy. We had so many extraordinary expenses, for appliances, drugs, protective equipment… So, it is important to ensure that when this passes, we can continue our dynamic economic growth", she said. ﻿

"On average, the test results are waited for five hours, and a maximum of 12 hours. In many countries, tests are waited for five days. Every day, the number of tested increases and Serbia convincingly tests the most in the region, followed by Slovenia, and then Romania. "Regarding the situation in Europe and the region, we are in the green zone, believe it or not," Brnabic said.

She points out that she is against closing schools.

"Students and teachers are disciplined and the measures are respected, so schools continue to work normally for now," she says. Brnabic said that she believes that not a single day was lost and that the measures were taken at the right time.

Loncar: The worst in Belgrade, all capacities are full

Minister of Health Zlatibor Lončar thanked everyone who works in the health system and that because they work well, our people do not have to go to other countries for treatment.

"We have turned all the available capacities into COVID capacities. The situation is the worst in Belgrade," Minister Loncar said.

"As of today, we are transferring the entire Selters Spa to the COVID system, and from tomorrow, the entire capacity of Banja Koviljača," he added.

As he said, it is necessary for us to adhere to the measures for these 15 days and for everyone who made the problem, parties, celebrations to stop.

"Now we will have enough communal inspections. We just want to save human lives, people's health," Loncar stated.