WASHINGTON DC -- The incumbent US President, Donald Trump, spoke in front of the White House about the coronavirus, as well as about the vaccination strategy

WASHINGTON DC -- The incumbent US President, Donald Trump, spoke in front of the White House about the coronavirus, as well as about the vaccination strategy 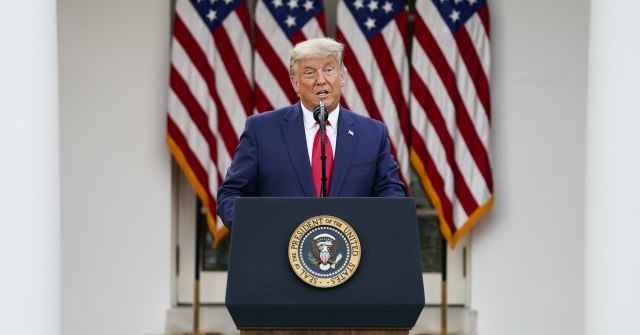 This is Trump's first address after the elections, and the last time he spoke was on election night.

He said that as a result of the "Warp speed" Operation, Pfizer announced that the vaccine against, as he said, the "Chinese virus" was 90 percent successful.

He stated that in July, his administration reached an agreement with the company Pfizer on financing the production of the vaccine.

Trump announced that the vaccine will be free for everyone in the United States.

"We gave a lot of money to get the vaccine. Otherwise, the research takes eight to 12 years, and we will get the vaccine in less than a year. That is five times faster than the fastest vaccine ever," he pointed out.

"We have a lot of cases of infection, but that's because we test a lot, a lot more than others. We have great and fast tests. Every American who needed a respirator got it, there's not one person in this country who needed a respirator that was left without it, we produce enough of them", he said. He said that the federal government will not deliver possible vaccines against coronavirus until the governor of New York, Andrew Cuomo, informs the administration that he is ready for that.

"So we won't deliver it to New York until we have approval for it and it hurts me when I say that. This is a very successful, incredible vaccine of 90 percent success and more, but Governor Cuomo will have to let us know when he's ready," he added.

"We ask all Americans to remain vigilant, especially because the weather is getting colder and it is harder to go out and gather outside," Trump said.