BELGRADE -- Epidemiologist Dr Predrag Kon stated that he would not introduce a state of emergency at this moment, but that he would certainly tighten some of the measures

BELGRADE -- Epidemiologist Dr Predrag Kon stated that he would not introduce a state of emergency at this moment, but that he would certainly tighten some of the measures 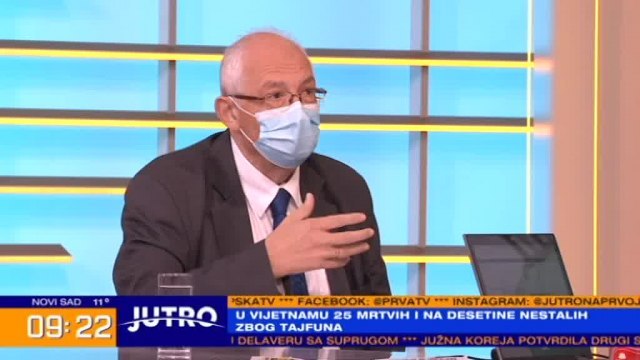 He said in the morning program of TV Prva, answering whether the only thing that would save us was the state of emergency and whether he would introduce it now, he said: "I would not. I would introduce somewhat more restrictive measures, but not so much. But I would insist on implementing measures. I've been talking about it for two months".

He says that it was necessary to start much earlier with strict supervision. As an example, he stated that the one who makes an event for 200 people until the wee hours is aware of what he is doing.

"In these conditions of a pandemic, he is breaking the law. And then, who is responsible? It is a crime, not a misdemeanor. And it is now up to the lawyers to solve it," Dr Kon explained, adding that the Crisis Staff has done everything so far in their capacity and within the framework of legal norms, but that now nothing is in their hands anymore.

The key problem, Dr Kon pointed out, lies in the entertainment industry.

"We did not manage to completely suppress the virus, it was laying low for a while and it started to grow now. We had imports, but that was not the main thing. If we had managed to suppress it then, this would have been slower. The desire to spend time together, contacts started again. Life continued and you don't think about it. I am like a raven that constantly sends negative news. The fact is that the virus is there and we've seen what it does in Europe and we've had some advantage. Now we have no more advantage," Dr Kon said this morning on TV Prva.

Speaking about schools, he said that the "influence of the virus" can be seen there, the number of infected people has increased day by day, but he also points out that there is no transmission, because a system has been made of what to do in every situation.

"There is no flu at this time of year, and I am shocked that even after 23 years of dealing with the flu, people still don't know when the flu starts in our country," Dr Kon explained.

He adds that the flu starts to appear in December, so there is a peak in January and February, but he also explains that it all moves with the school holidays.

Barriers with masks have now been made. Although the virus is being introduced into schools, he says, they will not close for now because the situation is under control.

Asked when that moment will be when they would consider introducing a state of emergency, a member of the Crisis Staff says that for now that is not being discussed by the staff members.

He reminded of the statement of the President of Serbia, who said that he would not sit idly by if the health system collapsed. But, for now, it is not that moment, he said and added that they will not wait for that collapse.

The smartest thing to do, Kon says, is to wear a mask because it is the least that can bother everyone. "If someone doesn't want to wear it, he should not use public transportation, but his own car," he added.

Is there an end to the pandemic?

Asked to comment on the projections of prof. Dr Kočović on the peak of the third wave, Dr Kon says that these projections are also based on data on the increase in the number of newly infected.

"What I can say, based on my experience, and again everything is speculation, we are in the week of ascent, the next one will also be bad, and then it is possible that there will be a leveling of the curve. And that leveling again depends on us. The descent begins from the fifth week", Dr Kon concluded.