BELGRADE -- President of Serbia and the Serbian Progressive Party, Aleksandar Vučić, addresses the public after the session of the Presidency of the SNS

BELGRADE -- President of Serbia and the Serbian Progressive Party, Aleksandar Vučić, addresses the public after the session of the Presidency of the SNS 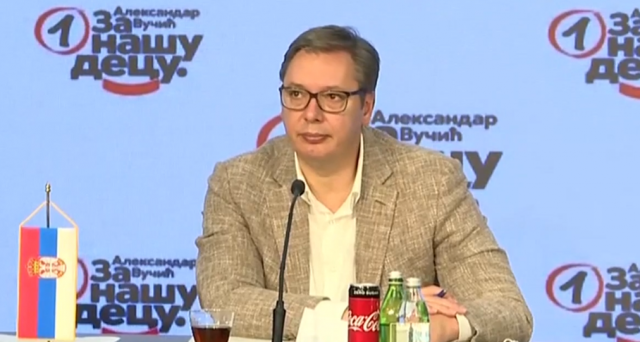 You can watch the LIVE broadcast on B92.net and B92 television.

"I want to inform you that we have considered several important things today and agreed at least as far as the responsibility of the SNS is concerned. We have agreed on the members of the Republic Government, the Provincial Government," Vucic said at the beginning of his address.

He said that a session of the SNS would be held at the end of March, at which the "new foundations" of the party's program would be laid, as well as a thorough reconstruction in terms of personnel. At the beginning of his address, Vučić spoke about the development of the situation with the coronavirus in Serbia.

The Prime Minister of Serbia, Ana Brnabić, announced the names of the ministers in the new Government of Serbia. Vučić especially emphasized the importance of the number of women in the Government, of which there will be 11.

"I personally insisted and prayed that two ladies who do not have a function and ties with the Serbian Progressive Party be elected, namely Dr Darija Kisić Tepavčević and Andjelka Atanasković," Vučić said.

"I will criticize them when I think they deserve it, as the president of Serbia, regardless of whether someone is a member of the SNS or a member of any party. I tried to see together with Ana who did what, to see what have been done for the previous four years and what can be done in the next period", Vučić said.

He emphasized that the decision on ministers was not made unanimously. Vučić added that Bratislav Gašić will remain in the position of director of the Security Information Agency. ﻿

"Let me point out something to the citizens of Serbia - every day they throw the most garbage on my head. Every day they say that I am the worst in the world. Don't worry. There will be big changes in the SNS, but we will leave it to the membership. I don't know what are you cheering for, but I am convinced that the people in the SNS will be satisfied ", said Vučić.

The President of Serbia, Aleksandar Vučić, stated that Belgrade will not leave the dialogue with Priština, despite the fact that Priština does not fulfill the agreements and violates the agreements it signed.

Vučić said that he was in a situation to "turn his head" and interrupt the dialogue countless times, however, he points out, he was not allowed to do that, because others would hardly wait for that move by Belgrade.

"We must continue with the dialogue and we must not leave the field empty, because someone would hardly wait, regardless of whether you are right or not, to make a par-forfait decision. We must not allow ourselves that," Vucic said in response to the question of journalists whether dialogue is possible, bearing in mind that Pristina continues to lobby for new recognitions and candidacies in international organizations.

He says that the worst thing for Serbia would be to get out of the dialogue and still be blamed for that.