BELGRADE -- Today, the President of Serbia, Aleksandar Vučić, laid a wreath at the Monument to the Unknown Hero on Avala on the occasion of the Liberation Day of Belgrade.

BELGRADE -- Today, the President of Serbia, Aleksandar Vučić, laid a wreath at the Monument to the Unknown Hero on Avala on the occasion of the Liberation Day of Belgrade. 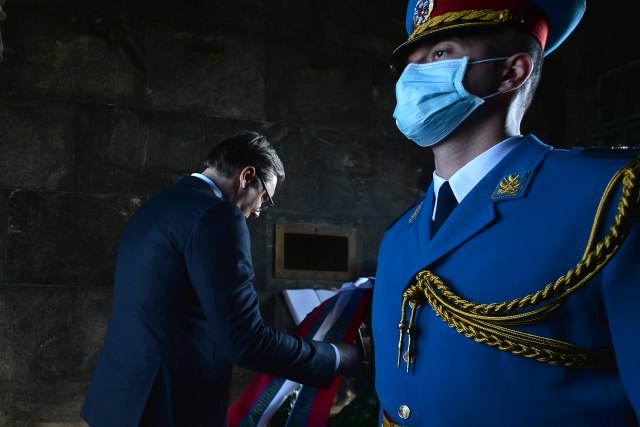 Serbia’s capital Belgrade marks the 76th anniversary of the September 21-October 22, 1944 battle for liberation from the German occupation in the World War II.

After laying the wreath, President Vučić wrote in the memorial book:

Decades that pass do not diminish the magnificence of your accomplishment. Thanks to your courage and great sacrifice, Belgrade today lives as a free city in our independent Serbia.

It is a city where people see their own and their children's future.

Today's Belgrade and Serbia show that your sacrifice was not in vain.

Heroes, you deserve eternal glory, thank you for the freedom".

The wreath-laying ceremony was attended by the Minister of Defense, Aleksandar Vulin, and the Chief of the General Staff of the Serbian Army, Milan Mojsilović.

Today, Belgrade marks the Liberation Day of the capital in the Second World War by laying wreaths.

After several days of hard fighting, members of the Yugoslav People's Liberation Army, aided by their Soviet allies, liberated Belgrade on October 20, 1944.

The battle claimed the lives of 2.953 members of the People’s Liberation Army of Yugoslavia (NOVJ) and 976 Red Army’s soldiers.

The Belgrade operation or the Belgrade offensive is one of the largest and most significant battles in the Balkans in the Second World War, and it lasted from October 12 to 20, 1944.