BELGRADE -- Deputy director of the "Batut" Institute, Darija Kisić Tepavčević, said that the most infected were in Belgrade - 54 percent or 66 people.

BELGRADE -- Deputy director of the "Batut" Institute, Darija Kisić Tepavčević, said that the most infected were in Belgrade - 54 percent or 66 people. 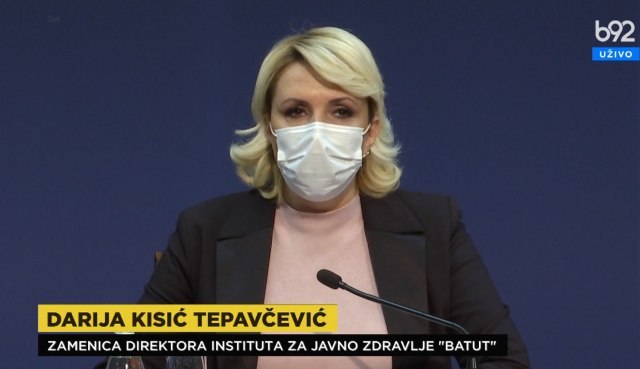 Then follows Kragujevac, Nis, Novi Sad and Loznica, Vranje, she said at the press conference of the Crisis Staff.

As she said, since the beginning of the school year, 80 students have been positive for coronavirus, out of that number, there are 52 students from primary and 28 students from secondary schools.

Most students have sporadic cases and are infected outside of school.

Kisic Tepavcevic reiterated that wearing masks is mandatory indoors, in the open if it is impossible to keep a distance of 2 meters, it is forbidden to gather 30 people at events.

Crisis Staff held a session today at which it was decided that all catering facilities work until 11 pm.

The measure on working hours until 11 pm does not apply to pharmacies and certain gas stations, deputy director of the "Batut" Institute, Dr. Darija Kisić Tepavčević, explained.

Vesić: There is no control that would check on everything

The deputy mayor of Belgrade, Goran Vesić, said that Brussels had decided to close all bars, and he also mentioned other cities in the world that are introducing measures and closing bars.

"As you can see, all big cities are endangered. That is why it is necessary for us to behave in a special way in Belgrade where the spread of the infection is possible, such as transport and catering facilities," he said.

Vesić said that five reports were written for officials and five reports for legal entities, and one against public transport drivers.

"If you notice that drivers don't wear masks, if they have closed cabins, they don't have to wear them. But there are buses that don't have cabins," he said.

As he said, the infected come from parties, not from the economy sector.

"If we adhere to the measures and do not go to parties, we will save ourselves and others," he said.

Vesić said that 1.641 public transport vehicles were on the streets and there are deficient number of inspectors in order to check on everyone.

"There is no control that could monitor every single vehicle," he said.

As he stated, 185 misdemeanor warrants were filed due to non-compliance with the measures.