BELGRADE -- The President of Serbia responded to the criticism coming from Montenegro, claiming that he is cooperating with Milo Djukanović.

BELGRADE -- The President of Serbia responded to the criticism coming from Montenegro, claiming that he is cooperating with Milo Djukanović. 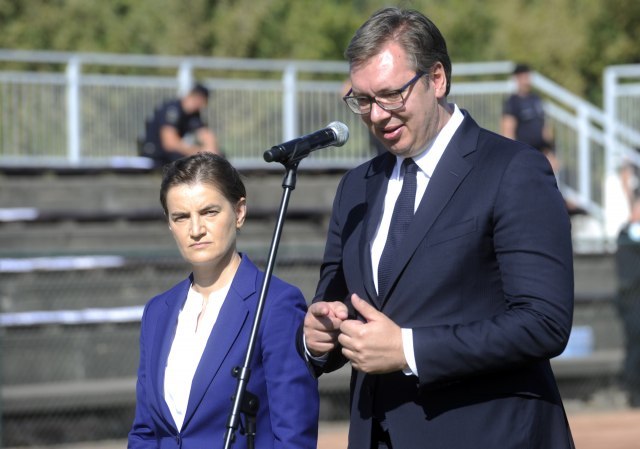 He called on the candidate for prime minister-designate of the Government of Montenegro, Zdravko Krivokapić, to inform the public as soon as possible about all elements of his alleged cooperation with the President of Montenegro, Milo Djukanović.

"Especially business wise. And I'm sure he'll either say he lied or bring evidence. Since I know it's impossible to bring evidence, as I know we've never even talked about it, because I'm not a businessman", the President of Serbia stated.

That is how he answered the question how he commented on the fact that Krivokapić said "the worst things about him", and even that he was allegedly in business with President Djukanović in the Belgrade Waterfront Project. "Krivokapic will have to admit that he spoke untruths", Vucic added.

He says that this is not the only untruth and that Djukanovic also told a lot of untruths about the role of Serbia in Montenegro. "We don't have to look back on that," Vucic added.

Asked how he comments on the fact that the Serbian opposition says that it is in trouble now, because it cannot "control" the three leaders in Montenegro, and how the relations between Serbia and Montenegro will further develop and whether it will invite Krivokapic to visit, amazing how contradictory things people say.

He explains that the funniest thing is that in the last 20 days, Djukanovic has been accused of overthrowing him, then Djukanovic's opponents have accused him of helping Djukanovic, while today they found a new phrase, so they say that "Vucic wanted to weaken Djukanovic, not just bring him down".

"You could see it all in the same newspaper and coming from the same people, I wonder whether it's possible for people to say such contradictory things."

He pointed out that one can see much more interference from Montenegro and other countries in the region in our internal relations, since many in the region have recognized the independence of the so-called Kosovo and in the most direct way, they interfered in the internal affairs of Serbia and violated Resolution 1244, and now they are saying, "this is how Serbia interferes."

"Serbia just wants to show care for its people, and that is our legitimate right and in accordance with all European conventions, and no one can forbid us to do that," Vucic said.

He adds that he never had any business arrangements with Djukanovic, and that he thought that it was up to Milovan Brkic and opposition leaders who could not reach the census.

As for Krivokapić, Vučić points out that he wishes all the best to all the people in Montenegro, as well as that he does not know any of the three leaders.

"I think I saw Becic once in my life, but that was when we were here in opposition, if I'm not mistaken. I've never seen them in my life. That's how much I supposedly wanted to control someone. For me, the people with whom we have friendly and fraternal relations are important to us, and those are Andrija Mandić and Milan Knezević, and we believe that it will be the same with Milačić, because they are people who do not hide that they belong to the Serbian people and that is why we have the right to legitimately fight for their collective and individual rights. "

Answering the questions of the journalists about the attacks in the media on his family, Vučić says that it is written that his brother is the owner of the entire land in Vojvodina, and he does not have any land there. "Please take me to any of my brother's lands. They won't take me anywhere because it doesn't exist. It's a lie," he said.

Will anyone from Montenegro be invited to visit Belgrade?

Vucić stated that the visit of Montenegrin officials to Belgrade will depend on when and to whom Prime Minister Ana Brnabić or the future Prime Minister will send an invitation.

Vučić said that, if Zdravko Krivokapić is elected Prime Minister of Montenegro, it would be a shame, he says, to come to the Belgrade Waterfront without important and strong evidence for the accusations about Belgrade.

"I am convinced that then he will bring that important evidence about Belgrade Waterfront, to introduce us to that, and it would be important because of the entire public, not only in Serbia, but in the entire Balkans," Vucic said.

He says that Serbia has been the subject of attacks by "all vultures from the Balkans" for decades, but that today it is a country that is growing at the fastest pace, with the best economy and the lowest unemployment rate.

Vučić added that Montenegrin officials will have a lot of work to do in the upcoming period to solve economic problems, and added that Serbian economic growth, despite the crisis, is one of the best in Europe.

"And as you can see, we are not satisfied, we are catching up, we are working, and we already have 60 percent of all foreign direct investment in the Balkans. I wish them a lot of success and I believe they will have the luck and pleasure to share such a great economic result with their citizens", Vucic concluded.