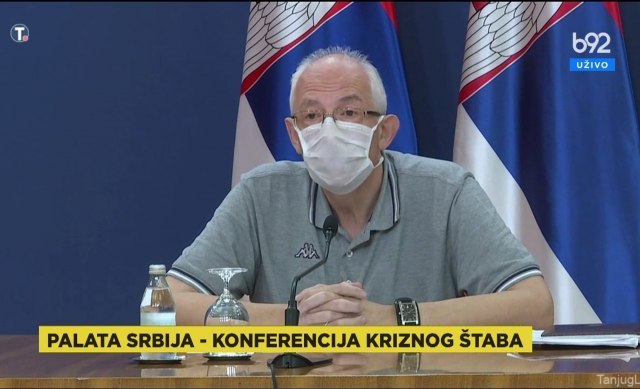 Deputy Director of the "Batut" Institute, Darija Kisić Tepavčević, said that there were four children and four mothers in the Dragiša Mišović Clinical Hospital, while one child was hospitalized in Niš.

"We can notice that over 20 countries in Europe have registered record numbers since the outbreak of the epidemic. In almost all countries in Europe and our region, the frequency of the region is recorded. We are surrounded by numerous hotspots with intensive virus transmission," she said.

Dr Kisić Tepavčević said that our citizens are more likely to become infected in the surrounding countries than in Serbia.

"When it comes to Bosnia-Herzegovina, 94 per 100,000, the risk in our country is below 15 per 100.000. At this moment, we all have to make every effort to maintain the epidemiological situation," she said.

The general conclusion is that we must not be deceived by the favorable epidemiological situation in our country, she noted.

"I appeal to everyone to continue to behave responsibly like this," Darija Kisić Tepavčević said.

She said that three options were considered at the session of the Crisis Staff, and the most efficient procedure is required, and that we exert as little burden as possible on the health system.

"We all have to work together and we all have the same goal to preserve our health," she concluded.

Epidemiologist Predrag Kon said that it is an extremely serious risk and spending the summer in the region is a bad choice.

“It’s as if caterers don’t realize that through their engagement, the transmission of the infection can be reduced,” Kon said.

As he said, discipline brought us to this situation.

"Now everyone will rush into each other's arms, dancing and singing. That is not smart and wise, it will put us in a situation where hospitals are being filled again," he said.

He added that new measures were adopted in order to keep the virus as long as possible, and for our citizens to behave properly upon their return to our country.

"It is safer now at the Infectious Diseases Clinic with a mask than at places where there are mass gatherings and thus the transmission of the virus, than at a party in Montenegro. These drastic messages are necessary to understand that we are here now because of self-discipline and therefore we must not take off in each other's arms. It's not wise, because our hospitals will be filled again", Kon said.

He added that control will be necessary and that it will be implemented.

"Today, a strategic decision was made, which has been preparing for three weeks now. A big decision was made on that issue, because we had more than 40.000 crossings last week, with Montenegro alone," he said.

As he said, if they were infected, there would be 400.000 people who are in contact with the virus.

"Surveillance will be carried out, there will be a situation that someone does not expect," he said.