BELGRADE -- Director of the Infectious Diseases Clinic, Dr Stevanović, pointed out that there is a tendency of more elderly people getting infected again, unlike July.

BELGRADE -- Director of the Infectious Diseases Clinic, Dr Stevanović, pointed out that there is a tendency of more elderly people getting infected again, unlike July. 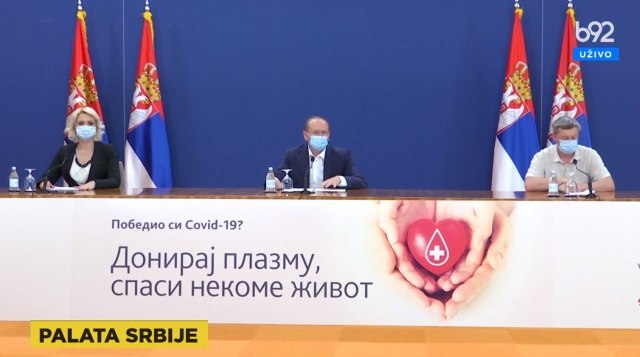 "Young and middle-aged people dominated, but now older people are coming back, but the number of these patients is smaller than when we did 350 examinations in one day. The clinical picture is such that 20 percent to one third require hospital treatment," Stevanovic said.

Epidemiologist Dr Darija Kisić Tepavčević stated that next week we will have more information regarding the beginning of the school year.

"We are looking at the experiences of all countries regarding the organization of classes in schools. We have clear guidelines, driven exclusively by the principles of evidence-based medicine. It remains to harmonize a few more elements, and you will be informed about technical details early next week," Kisic said.

She said that "the collision of flu and COVID is known".

"The simultaneous appearance of seasonal flu and coronavirus is certain, but general prevention measures apply to both viruses, so it does not bring new problems, and there is a vaccine for the flu virus," she said.

She stated that the biggest peaks of the flu infection are from December to February and the beginning of March of previous years.

"If we look at previous years, the flu season starts from the end of October and lasts until March, which is a long period. We had the largest number of patients in February. The biggest peaks of previous seasons are from December to February, and sometimes until March," she said.

The Provincial Secretary for Health, Dr Zoran Gojković, said that there was growing number of infected people in Leskovac and Kruševac, but also a decrease in Valjevo and Šabac.

He added that the measures will be lifted only when "the numbers get better".

The deputy director of the "Batut" Institute Dr Darja Kisic Tepavcevic says that the research of the contacts of the infected starts from the family.

"When it comes to contact research, epidemiological research first focuses on family, intensive contacts, in such conditions home isolation measures are implemented. In wider contacts, it is considered whether the contact was risky or not, and then they are made accordingly. "We should all act as if we are carriers of the infection," Kisic concluded.