BELGRADE -- Minister of Health, Zlatibor Loncar, once again pointed out after announcing the number of newly infected with COVID-19 in Serbia that the situation is serious.

BELGRADE -- Minister of Health, Zlatibor Loncar, once again pointed out after announcing the number of newly infected with COVID-19 in Serbia that the situation is serious. 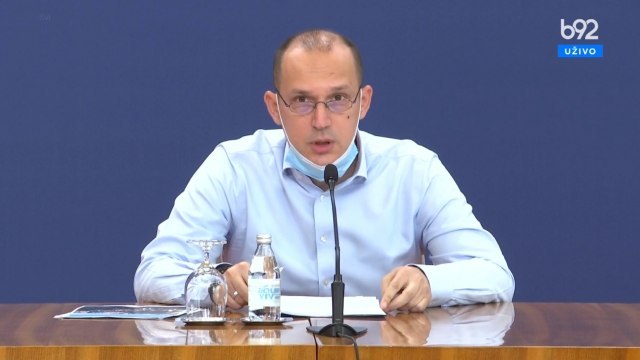 Minister of Health Zlatibor Loncar said that according to these data, which we have today, they speak for themselves how serious the situation is and how we should all approach this problem together, after announcing the new results at the press conference.

From Monday, conferences are held again every day, as was the case during March and April.

"Capacities in Belgrade are at their maximum, all COVID hospitals are over 90 percent full. During the day, the Institute of Rheumatology will start working with new capacities."

He stated that 70 health workers are in treatment, and about 500 positive ones are in isolation. He adds that doctors are regularly tested and taken care of.

"Our health care system was not left without health workers nor was it felt by the number of infected people, because solidarity was expressed. There is always someone stepping in and helping instead of the one who is infected," Loncar said.

There are more and more patients who we consider to be young, patients aged 20, 30 and 40, Loncar said. Their treatment lasts longer and the clinical picture is more serious.

"We are trying to test all the people that the profession says is necessary to test," he pointed out.

We respect people who want to be tested for any reason, but the priority presents people with symptoms, he adds.

"The average is between 30 and 50 years of age. The disease takes a difficult course in a certain percentage of patients," Dr Goran Stevanovic said.

It is still stated that people who are older with other diseases have a more serious prognosis, but these months the younger population is the most infected, Stevanovic points out.

"The scientific and professional public has nothing new to recommend, except for measures we have repeated many times: physical distance, masks, hand washing. These measures save lives. We can learn from the elderly population, who have shown by example how we can protect ourselves. from infection", Kisic Tepavcevic said.

Chloroquine is only one of the drugs in the national protocol, and there is an exact protocol when it is given and when it is not, Dr Stevanovic said, adding that no patient in Serbia passed away without receiving the best possible therapy.

Minister Loncar assessed the stories that a new strain of the virus has appeared in Serbia, which is stronger than the one in Italy, as rumors and speculations.

"We did not consider curfew and other measures to restrict movement. We said why we did it at the beginning of the pandemic, why we introduced stricter measures, primarily in order to protect senior citizens, in the meantime we have strengthened the health system," Kisic Tepavcevic concluded.