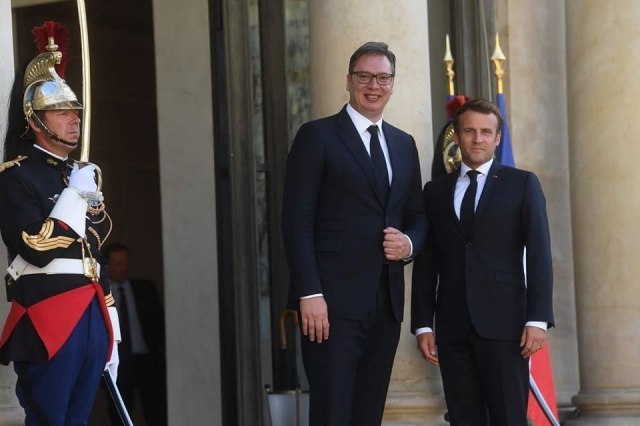 After the conversation with the President of France, Emmanuel Macron, President Vucic stated that he talked with Macron in private for an hour and a half.

"I must say that he took me to rooms that are not an official office, so I could see special rooms for French presidents. He recalled the emotions he experienced in Belgrade. He showed exceptional hospitality," Serbian President said.

When it comes to tomorrow's summit on Kosovo and Metohija, organized by Germany and France, Vucic said that he was not sure that a joint statement could be adopted. ﻿

"I spoke strategically about what I think was happening and what could happen in the future," Vucic said.

Speaking about the protests, Vucic said that there would be no reaction from the police if there was no violence.

"It is stupid to demonstrate because of coronavirus, but if they want, protest as much as you want, just don't touch the police. In Serbia, the right to assemble is guaranteed, and power is taken in elections. if you want to do it during COVID infection, fine", Vucic reiterated.

"It is stupid to demonstrate when you are facing a coronavirus infection", Vucic said, adding that no one would be allowed to take power by force.﻿