BELGRADE -- "It is clear that we have a situation that can be described as bare violence," Interior Minister Nebojsa Stefanovic said

BELGRADE -- "It is clear that we have a situation that can be described as bare violence," Interior Minister Nebojsa Stefanovic said 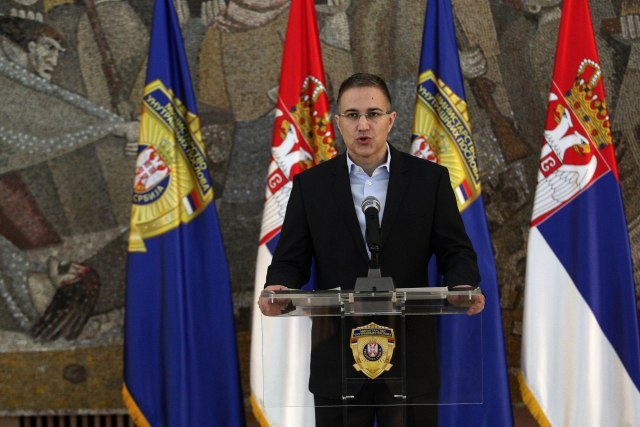 "These are attempts to take power without the will of the people, without participating in the elections," Stefanovic said at an extraordinary press conference.

"You could see the completely calm and restrained behavior of the police, despite protesters throwing stones and bricks towards them. Despite all that, the members of the police were restrained, they reacted only when their lives were endangered. They were attacked by everyone, even with shovels, Molotov cocktails", Stefanovic pointed out.

He said that these were attempts to take over power by force and violence, without the will of the people, and that the protest was illegal and that no one reported it. As he stated, many were under the influence of alcohol.

Stefanovic announced the arrests of everyone who dared to physically endanger any person or anyone’s property and asked the prosecutors’ office to react as soon as possible in line with the law.

"They have been calling for the destruction of law and order for days, and unfortunately they are committing violence," Stefanovic emphasized.

He added that the courts and the Prosecutor's Office will do what is within their jurisdiction and that the public will be informed about that.

"Everyone has the right to protest, but you need to report the protest. Go to the polls, run, show your ideas, and do not solve everything with violence," Stefanovic said in his address to the media.

"Patrols will be on duty in Belgrade, but also wherever necessary," the minister concluded.

He said that there were indications of foreign involvement in the events, but that he would comment on it when they provide enough credible evidence.

"Be sure that no one will be privileged, all those who destroyed the city or threw stones will be sanctioned," Stefanovic said, adding that all those who caused the incidents would be identified, and that some were already taken to custody for 48 hours.