Crisis Staff session ended, those are measures to be introduced PHOTO

BELGRADE -- At the Crisis Staff session of the Serbian Government, held due to the worsening of the epidemiological situation, it was decided to introduce new restrictions.

Crisis Staff session ended, those are measures to be introduced PHOTO

BELGRADE -- At the Crisis Staff session of the Serbian Government, held due to the worsening of the epidemiological situation, it was decided to introduce new restrictions. 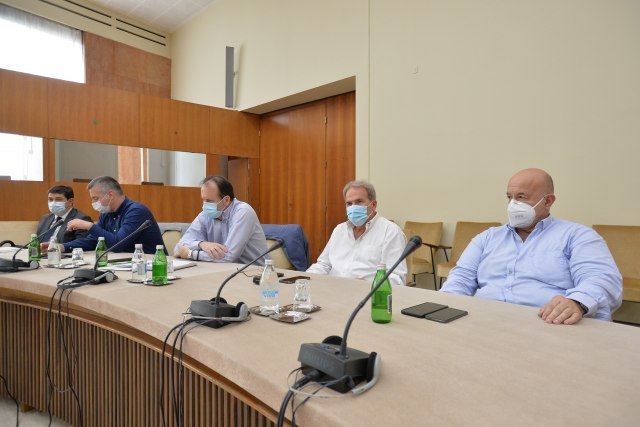 Belgrade media report that, as previously announced, at today's session of the Crisis Staff, some measures are expected to be tightened due to the leap in the number of patients with coronavirus in Serbia. ﻿

According to unofficial media information, it will be requested that the number of people indoors be limited to 100, and not less than 500, as has been the case so far, while all prom nights and similar celebrations that have not been held so far would be postponed.

Dr Darija Kisic Tepavcevic stated that from tomorrow in the area of the city of Belgrade, from six o'clock in the morning, it will be mandatory to wear masks in all closed spaces and indoors facilities, and not only in transportation, as the headquarters decided, and the government confirmed last week. Also, the new measures will have to be strictly monitored and there will be penalties, Belgrade media have learned.

"These do not have to be surgical masks, but cotton ones that we sew ourselves, any mechanical protection. We appeal for the use of other prevention measures, such as a physical distance of at least one meter, as well as regular hand washing," Kisic Tepavcevic added for Tanjug after the meeting of the Crisis Staff.

She said that those measures were adopted due to the increase in the number of infected people in the previous days.

"Blic" finds out that there will be no penalties for the next seven days, but the sanctions will start if the appeals do not yield results. In the next two days, the Crisis Staff will propose the criteria on the basis of which an emergency situation can be declared.

Also, according to the media, the gathering of up to 200 people is limited, and this measure is valid for both open and closed space.

The session of the Crisis Staff started at 10 am, and the first information about the new measures was published shortly after 12 o'clock.