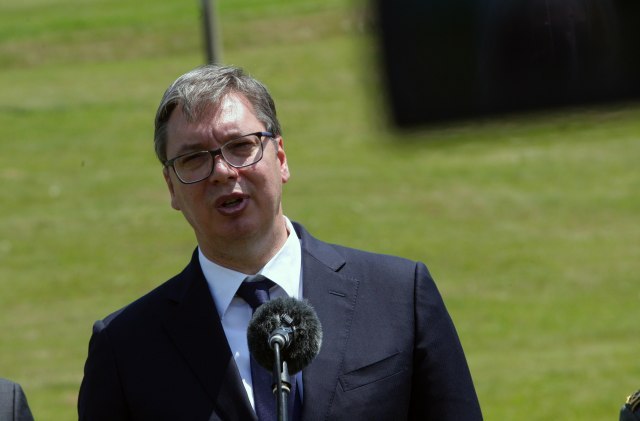 Today, President Aleksandar Vucic visited the plant of the new factory "Vorwerk" in Cacak, which also produces parts for Porsches and other most famous car brands, and said that - there is no Porsche without Cacak.

Vucic personally witnessed that the production of parts for the automobile industry was launched in the new factory of the German company "Vorwerk" and talked to the workers.

"There is no Porsche without Cacak, when you see someone driving a Porsche, you know that it would not be possible, if it were not for Cacak and the workers from Cacak ... Porsche 'made in Cacak'," Vucic added jokingly.

"Today is a great day, a day that makes a difference, for those people who have invested effort in this. For western Serbia, this is of crucial importance," he pointed out.

As he said, we promised German investors that a highway would be built by the beginning of the factory's work, and they had some doubts about that.

"The highway is there as we promised, but maybe the opening of the Vorwerk factory is more important, because 186 people got the job and it will employ more than 1.000 people altogether. So, young people can stay here to live," the President of Serbia said.

He stated that Vorwerk did not come to stay for five or ten years. "They came here to stay for decades, to work, to make profit, to improve their business," Vucic said.

"I don't see much better places to invest than Serbia," he said.

He stated that there used to be a "neglected meadow" on the site of the company, and today it is a "magnificent hall".

"There have been no factories like this for decades," he said.

"I thank my entire team, as well as Ana's. A lot of good things have happened, Cacak must continue its development. We will continue to build roads, an airport, to make Cacak the hub of western Serbia. Cacak is becoming a better place to live and have a better future", President Vucic concluded.

The factory, which covers 40.000 square meters, will produce parts for the auto industry, and about 1.000 workers will be employed by the end of the final phase. The value of the investment in Preljina near Cacak is 50 million euros, and significant support was provided by the city of Cacak, which invested several million euros in the construction of communal infrastructure.

Auto parts for Audi, Daimler-Chrysler, Volkswagen, Bentley, Ford and BMW made of plastic, rubber and metal will be exported from this factory.

The planned export by the end of this year amounts to 10 million euros, and the goal is to multiply it by 2025 and reach the figure of 150 million euros.

Vorwerk CEO Jurgen Meller said that in 2018, they attended the laying of the foundation stone. "Today we are making one of the biggest steps in the expansion of our company," he said.

"We made a good decision when we decided to work in Serbia, and even better that it is Cacak," Meller said.

The new opening of the factory and the beginning of production is always a reason for joy, because on one side a lot has been done, and on the other, a new chapter in the history of the company begins, Meller said at the ceremony in Cacak.

He pointed out that this year's COVID crisis overshadowed this event a little, but, he says, history has shown that every crisis always has its end.

Meller said that the current investment amounts to 60 million euros, and announced that it will increase further.

The factory currently has 175 employees, and the plan is to have 1.000 or more in the coming period, he states.

He pointed out that Vorwerk will not close its eyes to the changes in the industry, will not allow to be hindered by international turbulence, will be overwhelmed by the fear of penalties, but will remove obstacles from its path.

"We look to the future with a lot of energy, because the future is what we create. Today we are taking one of the biggest steps of expansion in our history of 200 years," Meller explained.

General Director of the Vorwerk factory in Cacak, Nenad Medenica, said that two years ago there was a meadow where people made barbecues, while today, on this ground, parts for Volkswagen, Daimler and BMW on the most modern machines are being made.

He thanked everyone who contributed to the realization of that investment, and especially the President of Serbia, Aleksandar Vucic, and the Mayor of Cacak, Milun Todorovic.

"We are now exporting parts for the automotive industry around the world. The big challenges are behind us, and even bigger ones are ahead of us, but I have no doubt that we will overcome them," Medenica said. The mayor of Cacak, Milun Todorovic, stated that the city is becoming a symbol of development and investment. "What we have been dreaming of for decades, we have achieved," he said.

"Today, we are opening a factory that has four and a half hectares under the roof," Todorovic said.

He stated that Cacak wants and will become the third traffic hub in the country.