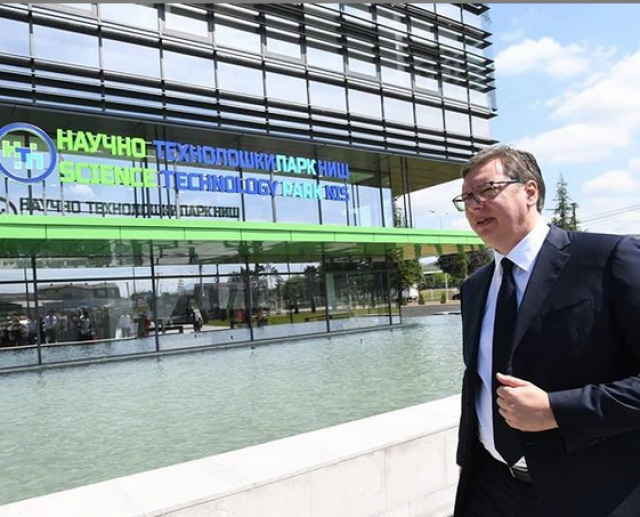 "This is the most important thing we did in Nis. We brought seven factories to Nis, from Johnson Electric to this one today. But STP (Science and Technology Park) is what should make a difference," Vucic pointed out.

Vucic stated that Serbia is a country that was a paradigm of disbelief in its future. "I heard that from you and the video instills hope that we can help, and we expect the most from you through new investments, payment of taxes to the state," he said during a tour of the Science and Technology Park and talks with representatives of companies that will be in STP Nis.

He said that people in Nis are hungry for success. "People are eager to move forward more than anywhere else. Hunger for success will launch new initiatives in start Nis", he said.

The President of Serbia, Aleksandar Vucic, said that Serbia would improve the legal framework for the development of blockchain technology, which will also be developed in the Science and Technology Park in Nis.

During the tour of STP Nis, which opened today, Vucic said that thanks to the development of that technology, it will be possible to trace every transaction at any time.

"That can be of great help to us," Vucic pointed out.

The President also noticed that the Electronic Faculty in Nis is "a real nursery of talents".

Vucic said that around 12.5-13 million euros were invested in the Science and Technology Park Nis. "I am very happy to see enthusiasm and that people have space to work," he said.

The companies that will move to STP will start working in August, and a total of 14.000 square meters will be available.

Vucic said that 12.5 million euros were invested in STP and pointed out that the state had invested a lot in Nis in previous years.

"A total of 20 million euros will be invested in this. We have invested a lot of money in Nis, which has lagged behind others, and is now moving forward rapidly," Vucic pointed out.

Together with the investment in the establishment of the Startup Center Nis, which will become part of the STP, and the laboratory branch of the Electronic Faculty, the total value of the investment exceeds 20 million euros.

The director of the Scientific Technology Park Nis, Milan Randjelovic, said that STP Nis developed on the foundations of the rich industrial heritage of Nis. "On 14.000 m2, there is a modern space that will add comfort and development environment to companies," Randjelovic said, adding that STP has, among other things, a restaurant, parking.

He said a contract had been signed with 31 companies that had become members, and that 442 people were working on the projects.

The opening is attended by Prime Minister Ana Brnabic and Minister of Innovation and Technological Development Nenad Popovic.

The construction and arrangement of the building and the accompanying space of the Science and Technology Park in Nis near the faculties of technology have been completed.

Science and Technology Park Nis is an organization that in close cooperation with the University and the academic community provides infrastructure and services to help innovative companies achieve business success in the market, especially in the field of high technology.

Around the building is a parking lot, as well as a beautifully landscaped park with fountains, and in the basement of the building, there are garages and a fitness center of 400 square meters, which will be given, through a public invitation, to one of the management partners.

The money was provided through the European Investment Bank, the investor is the Ministry of Education.

The construction and equipping project was managed by the Office for Public Investment Management of the Government of Serbia, while all activities under the contract were implemented by the Nis Office for Local Economic Development and Projects and the city, which was in charge of infrastructure and administrative support.

Three floors of about 2.200 square meters per floor were built, divided into office space for companies.

There will be a start-up company on the first floor and there are a number of smaller offices that are equipped, so that there are more meeting rooms and more space for joint activities that will enable young companies to get together.

The second and third floor are intended for companies and there is less entertainment content.

Also, a laboratory for prototyping and 3D printing will be formed within the park.

At 11.15 am, the President will visit the works on the construction of the factory "Xingyu Automotive Lighting Systems".