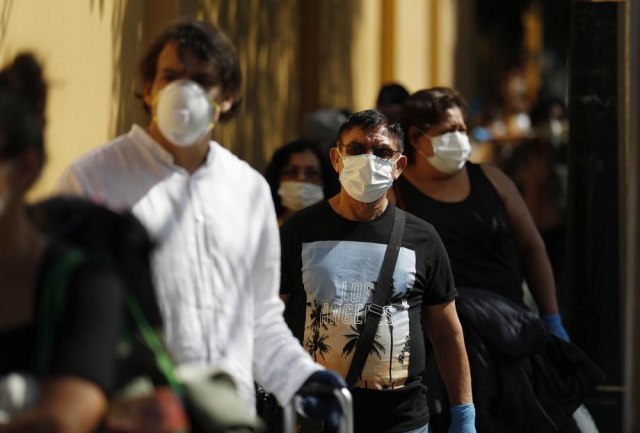 The main cause of this situation is poverty, CNN reports.

Peru was one of the first countries in South America to take strict measures to prevent the spread of coronavirus, such as a ban on leaving homes, curfew and border closings.

However, as of today, Peru had more than 123.900 confirmed coronavirus cases and 3.600 deaths - putting it second only to Brazil both in number of cases and deaths in Latin America.

About 85% of Peru's beds with respirators are currently occupied, according to government figures, and overcrowding at hospitals presents imminent danger, while medical experts fear the catastrophe, given that the health sector will not be able to respond to the crisis caused by the pandemic.

A Peruvian doctor Elmer Huerta told CNN that the reason for this situation is big poverty and the deep social inequality in Peru.

Many of Peru's poor have no choice but to go outside their homes for work, food or even banking transactions.

For example, only 49% of Peruvian households own a refrigerator, according to the country's 2017 Census. This means that many of them need to visit markets on a daily basis in order to provide for food because they can't stock up food, Huerta stated.

The crowds and queues in front of the shops are large. Most wore masks, but social distancing seemed impossible. Crowds are also made in front of the banks, where citizens are waiting in lines to raise the money provided by the government as coronavirus relief funds.

The government's stimulus package to help millions of Peru's most vulnerable families was a good idea, but its distribution was poorly designed, said Kristian Lopez Vargas, a Peruvian economist and assistant professor at the University of California.

In a report last year, it is said that only about 38% of adults have a bank account. The lack of access to the financial system means a majority of aid recipients have to go in person to the banks to obtain their money.

"Many Peruvians also live and work in ways that simply can't be reconciled with social distancing, he pointed out. According to Lopez Vargas, more than 30% of households in Peru live in overcrowded conditions, with four or more people sleeping in the same room", as CNN reports.

Moreover, more than 72% people work in the informal economy. For those living day-to-day in the informal sector, earning an income often depends on going out to work, thus violating self-isolation measure.

This, combined with the needs of millions to obtain food and other items from crowded markets, "was an explosive mix" for spreading the infection, Lopez Vargas told CNN.

Due to all this, the state of emergency was extended until June 30, keeping in place the mandatory self-quarantine and curfews across the country.

Certain businesses were in the same time allowed to re-open, including services like salons, food delivery and dentistry. The President announced that the authorities will make sure that health protocols in stores and markets are better respected and that those who do not follow these protocols will be punished.