BELGRADE -- Epidemiologist Dr Predrag Kon expected that "the day of the end of the epidemic" would come earlier, but, as he says, he was happy when it finally came

BELGRADE -- Epidemiologist Dr Predrag Kon expected that "the day of the end of the epidemic" would come earlier, but, as he says, he was happy when it finally came 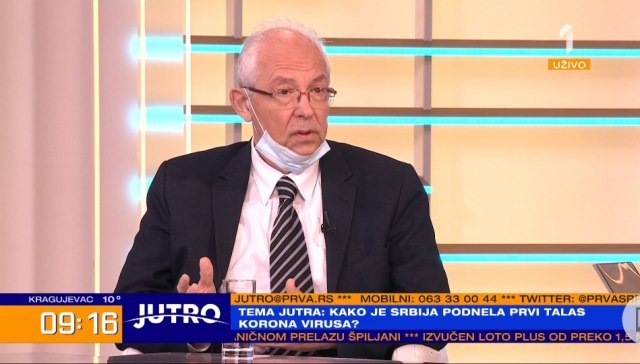 "You remember when I said in the 6th week that we were at half time. It is now the 12th week and we are slowly finishing that second half," he said, adding that "we don't need overtime."

Kon says that the situation in Serbia is "not bad", but that we will have more deaths.

He also expects the virus to appear sporadically over the summer.

"It weakens the possibility of its transmission, but it has nothing to do with the virus itself but with the season. As for the virus itself, there are some facts that, however, are impressive. There is no evidence that the virus has weakened in the sense that it has genetically changed and causes less disease”, he said.

Kon points out that the goal is not less discovered, but less dead.

"Revisions of the number of dead will have to be done, all over the world. If that is possible. When and if it will, it will certainly take time," he said.

Kon condemned those who believe that "the elderly die, those who 'should die'".

"The most disgusting sentence. Such thinking is not uncommon at all. If we had taken such an attitude from the beginning, we would have had to defend it to the end. Sweden is now the best in terms of collective immunity, but it paid a tribute in life", he said and considered it to be cruel.

Regarding the second wave, he says that he is "worried, but not scared".

"We should forget, in general, about the second wave. We should relax completely over the summer. We should be more ready for the second wave. Some think we will do the same as for the first, but I don't think so and I will give estimate when we get results from the southern hemisphere", Kon said, adding that he thought we would not face with a state of emergency again.