BELGRADE -- The draft Decision on the abolition of the state of emergency, which was proclaimed on March 15, reached Serbian Parliament.

BELGRADE -- The draft Decision on the abolition of the state of emergency, which was proclaimed on March 15, reached Serbian Parliament. 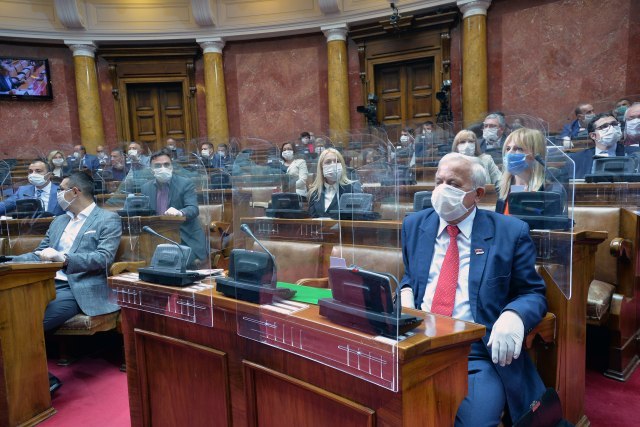 Also, the Bill on the validity of the regulations passed by the government with the signature of the President of the Republic during the state of emergency, which was approved by the Serbian Parliament, reached the Parliament.

The Proposal for a Decision on lifting the state of emergency that the activities of the competent health organizations and state bodies in the territory of Serbia have established active epidemiological surveillance of the disease COVID-19 in order to implement preventive and anti-epidemic measures in the control of the spread of coronavirus.

As a result of the implementation of the measures, there was a slowdown in the epidemic flow and the creation of conditions for the gradual acquisition of collective immunity. In such controlled conditions of spread of infection there was a decrease in the intensity of virus activity.

"In view of the above facts, COVID-19 can no longer be considered a disease of public health, which poses the highest risk to the state and citizens, so the Prime Minister and the Prime Minister jointly assessed that the conditions for declaring a state of emergency had ceased and decided, in accordance with the Law on Defense, to submit a proposal to the National Assembly to take a decision on the abolition of the state of emergency", the statement said.

The Bill on the Validity of Regulations states that on May 11, the competent election commissions will issue a decision on the continuation of electoral activities in the process of holding elections for MPs, MPs of the Assembly of the Autonomous Province of Vojvodina, along with the MPs of assemblies of municipalities and cities.

It was announced earlier that the Assembly should decide tomorrow to lift the state of emergency.

Parliament approved the Decision on the introduction of a state of emergency on 29 April.

Yesterday, Serbian President Aleksandar Vucic announced that elections, parliamentary, provincial and local in most local governments, originally scheduled for April 26, will be held on June 21.