BELGRADE -- Curfew begins at 6 pm on Thursday and runs until 5 am on Saturday, and a state of emergency is expected to be lifted next week, Aleksandar Vucic said

BELGRADE -- Curfew begins at 6 pm on Thursday and runs until 5 am on Saturday, and a state of emergency is expected to be lifted next week, Aleksandar Vucic said 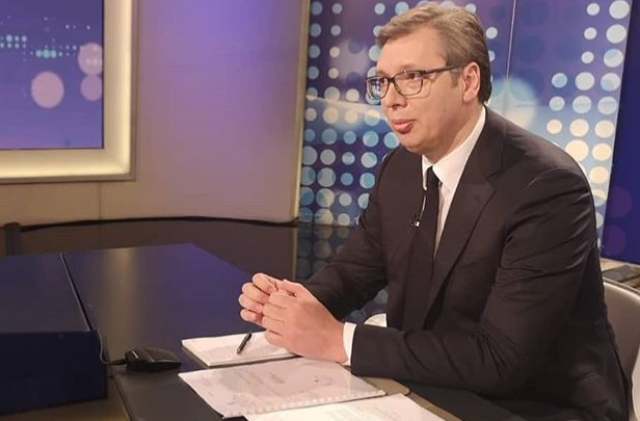 "You ask me the question as if it depends on me, it depends on the virus and the decision of the doctors," President of Serbia responded when asked when the citizens of Serbia would return to the state before the epidemic.

He adds that he understands that people are impatient, but that impatience is not our ally for the moment.

"People haven't even had a chance to see what the real crisis looks like," the President explains.

"None of us are sadists, nobody wanted to bother people, we just wanted to save the country and our people," the President says, stating that the numbers are good.

He added that the doctors agreed with the measures. He says he spoke with Prime Minister Ana Brnabic and Dr Predrag Kon tonight, and tomorrow he will come up with a proposal that epidemiologists have been seeking.

"I said we would listen to the profession, not politics. We would come out with a proposal that tomorrow, Thursday at 6 pm, a ban on movement would last until Saturday at 5 am."

He also added that the pensioners can go outside twice on Friday, with curfews starting on Saturday and Sunday as on weekdays at 6 pm and continuing until 5 am on the following day.

An additional rule is to ban the gathering of more than five people.

According to him, when the action was taken and the state of emergency was introduced, many people criticized the decision.

"It was necessary to introduce a state of emergency. The democratic question arises - should it have been introduced in the National Assembly or the way we did," the President says, adding:

Asked how he understands the message of whistles and whackers, the President replies that he will not discuss politics.

"I'm used to the pots and pans. There is only one thing that hurts me, which is that the doctors lost because they start whistling at 20.02 already, and the applause to the medical staff was thus shortened."

"I am a man who believes in the profession. My job is to be a leader. And that doesn't mean that I should follow everyone's wishes. I have no problem with people whistling. I never cried over it. I do my job honestly. And I certainly won't change political standpoints because of the whistles."

The President said that we currently have 675 new clinical respirators in Serbia and 375 in our warehouses in China.

Vucic said that he wouldn't exclude the possibility that by the end of next week the state of emergency might be lifted.

"Then, there will be no curfew either," he says.

"On Monday, I will have a meeting with the representatives of the political parties who want to participate on the elections, we will leave 4-5 days for everyone to prepare and that's when the election campaign begins," he says.

He adds that everyone is welcome to the debate, and that he states that he will not engage in an election campaign for the first 15 days, but will deal with presidential affairs.

"I was ready to hear every proposal, even though I didn't agree with it," he said, explaining that he would not succumb to the blackmail and the pressures.