BELGRADE -- Twenty-one years ago, on the night of April 22-23, NATO bombed the RTS building, killing 16 journalists

BELGRADE -- Twenty-one years ago, on the night of April 22-23, NATO bombed the RTS building, killing 16 journalists 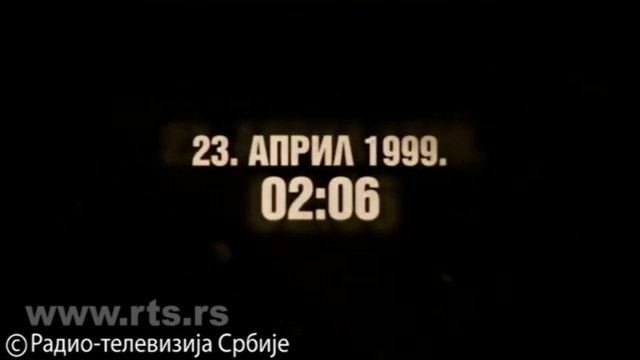 The name of this year's commemoration, which took place symbolically at two hours and six minutes, is "Remembering the Innocent."

Miroslav Medic spoke on behalf of the families of the killed RTS workers. For the first time in the history of warfare, a media outlet that was previously declared a legitimate military target was hit. The RTS building was bombed during a news broadcast, at 2 hours and 6 minutes, after midnight on April 23, 1999.

On behalf of the victims' families, Miroslav Medic, the brother of the killed Sinisa Medic, said that 16 RTS workers "were brutally murdered in their workplaces without the right to protect themselves and to take shelter at least during an air emergency".

"They were killed by NATO countries, which declared the RTS building a legitimate military objective against all previously known rules and customs of war, even though they knew it contained only civilians who did their jobs," Medic said, as RTS reports.

Miroslav Medic also said that "that morning, the ominous aircrafts killed 16 people at work, without clear warning and from a safe distance, showing no remorse."

"For the first time in the history of warfare, one media house was bombed, even though it was known that between 150 and 160 people work in it every night. They killed one makeup artist, one video mixer of a master technician, a technician in exchange units, an electrician, security personnel, a mechanics engineer, cameramen, equipment installers, equipment designers and directors", Medic said.

"Why? What did these people do to them? Who did they endanger? Did they threaten anyone? These were ordinary people who only did their daily business professionally," said the brother of the deceased Sinisa Medic.

"Why was none of the leaders of the 19 NATO nations who had committed aggression on our country without the approval of the UN Security Council held responsible for the crime? Why did none of the state authorities then do anything to prevent this tragedy? Why did no one at the Federal Ministry of Defense react to the failure of the then Director-General Dragoljub Milanovic to comply with the Federal Government's order No. 37, under which he was obliged to move people and equipment to an alternative place of work in case of the state of war?", Miroslav Medic inquired.

"Why did those who had to do it and who were obliged to do so, did nothing to protect people, even though there was an announcement that television was a possible target? Was it in someone's interest to increase the number of dead? Why almost no one helped families obtain evidence and shed light on all the circumstances that preceded this crime?", Medic wondered.

"21 years in front of the monument 'Why?', we are seeking answers to these same questions. We are seeking the truth. The victims and this monument stay as a reminder that such a crime will never be repeated and forgotten for future generations," Miroslav Medic concluded.