BELGRADE -- President Vucic is currently in Nis, he said that he hoped that the state of emergency in Serbia would be lifted by the end of April

BELGRADE -- President Vucic is currently in Nis, he said that he hoped that the state of emergency in Serbia would be lifted by the end of April 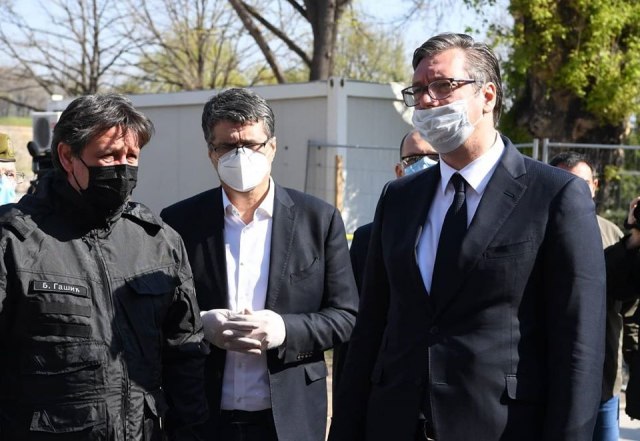 According to the President, from the very beginning Nis was under the great impact of the coronavirus, but he is sure that we will be able to defeat it with steel discipline and by acting responsible.

"I came as president to tell the people of all the districts and the people of Nis that the state is with them," the President says. Last night 5 respirators were delivered, this morning 4, which is a total of 29 respirators assigned to Nis.

It was decided that because of the exponential growth in the number of infected people in the Pcinja District, hospitals in Leskovac would become a COVID hospital, as well as the entire building of the Nis Clinical Center except the Emergency Center.

"And this is how our capacities are running out, we have no more hospitals, it is not easy to find accommodation and so I ask people not to be mistaken when they are told that they are going to some place and not where they would like to be," said the President in Nis and added that there were some additional facilities that would accommodate the lightest patients, because "Cair" was full.

"In the end, we will also prepare the Nis barracks and the Nais Hotel, and other hotels for them."

He states that the next 10 days are crucial. "By April 20, I think our destiny as far as virus is being concerned and that is why we need discipline," the President says.

In the coming days, Serbia will be able to make a 50.000 boxes of chloroquine-like medicine.

"In this misfortune, I am happy that we were able to create a modern Clinical Center," the president says, explaining that without it, there would be "cataclysm."

The next problem that the President wants to point to, and announces that the problem will be increasingly addressed, is the economy.

According to him, 9.000 boxes of chloroquine were found in one Clinical Center, while some medical institutions do not have this medicine at all.

"Forward it to every health center, let's treat people, with one box we can provide treatment for 4 to 5 patients," the President says.

He also states that he hopes that we will overcome "this evil" and that we will be proud. He especially thanked the medical professionals who put the hardest work on themselves.

Epidemiologist Branislav Tiodorovic said we are in for a difficult week, but until Easter the number of sick and dead will increase.

"After Easter, the prognosis is that the number of patients will start to decline, and then we will have a fall by the end of April," Tidorovic said.

He states that steel discipline is indispensable at the moment, and what citizens can provide as their contribution is to comply with all the measures that have been proposed. "These 14 days, we need to be disciplined, to realize that this is not a question of democracy, but a matter of civilization. If we follow what is happening around us, it is necessary to understand that we have avoided the Italian scenario, we have a Serbian one", Tidorovic said, who believes that we have managed to flatten epidemiological curve, although it went up at some point.

"I hope that we will be in a position to lift the state of emergency by the end of the month and I cannot wait," the President said at the end, explaining that these were not his forecasts, but his hopes.