BELGRADE -- Prime Minister Ana Brnabic says eight more people have died in the past 24 hours due to coronavirus, a total of 39 dead.

BELGRADE -- Prime Minister Ana Brnabic says eight more people have died in the past 24 hours due to coronavirus, a total of 39 dead. 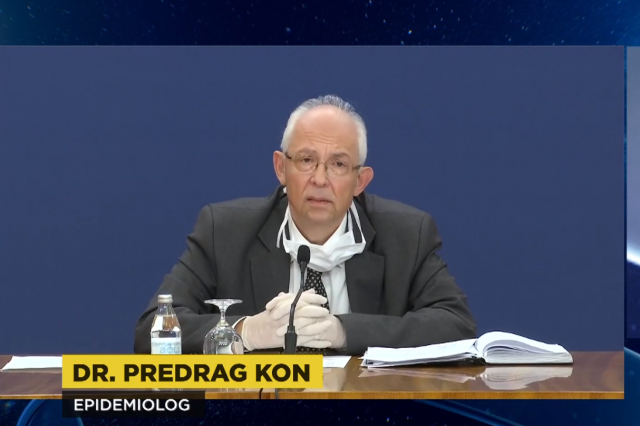 "What happened today - as much as we expected - still surprised us," the Prime Minister said.

"As of yesterday, at 3 pm, we had eight dead, which is the highest number of deaths, the largest so far," Brnabic said at Batajnica Airport, upon receiving Russian assistance in Serbia.

Prime Minister said that as of yesterday at 3 pm, 305 newly infected with COVID-19 had been registered, almost three times the number registered yesterday when there were 111 more.

"This is the day I fear we have gone into exponential growth," Brnabic warned. She thanked the Russian partners for their help, pointing out that we needed it and that it was coming on a difficult day for Serbia.

"This is the day when we entered the fifth week of the fight, when we are entering two very difficult weeks, which can be seen by today's numbers", Brnabic said.

"It seems to me that we did not expect such a huge leap in the number of infected people, over 40% of all tested positive. It is really scary," she added.

Brnabic expressed her concern that we have grown exponentially in the fight against the coronavirus epidemic, as evidenced by the latest data on the number of infected people and that is why she warned the citizens that without steel discipline we could not win "this war".

"We still lack discipline. Without steel discipline, we cannot win with all the medicines, equipment, millions of respirators, or with the support of experts from Russia, the EU, China, the United States," Brnabic said after receiving an airplane at the airport, delivering Russian aid.

She once again urged citizens to take the situation and the measures set by the Government seriously.

"Please take this seriously, I repeat, don't be fooled by the sunny weather, we are in the fifth week, if we face with three more days like this one, our health capacities will be completely filled, everything will fall apart, despite all the equipment and support", Brnabic said.

"70 percent of deaths are with people over 60, while in the age group up to 39, we did not have deaths", Dr Kisic Tepavcevic said.

She pointed out that of the new eight deaths, six were men and two were women. There are currently 81 people on the respirator.

She recalled that curfew starts on Saturday from 1 pm, and lasts till Monday at 5 am, for all our citizens.

She said that pensioners will be able to go to the stores tomorrow morning, instead of Sunday, from 4 to 7 a.m., and that they will be able to move on Saturdays from 3 to 8 a.m., to have time to leave and to return home.

She said that pet owners will be able to walk their pets from 11 pm to 1 am at night, and will have an extra appointment on Sundays from 8 am to 10 am.

Epidemiologist Predrag Kon said on the latest data on coronavirus dead and infected in Serbia that it is now "a matter for each individual's health security whether they will realize that we are in a serious situation".

He dismissed criticism on social networks at the expense of the measures taken, noting that it was an attack on health security.

"We have to understand that the virus is in circulation and it is necessary to prevent its transmission ... Measures have been taken just to prevent it, there is no negotiation on this", Kon said.

He says there is no information on new hotspots of coronavirus in Serbia and that almost half of those infected with coronavirus are in the Serbian capital.

He added that the number of hospitalizations exceeds hospitals' capacities, and that we would face with a bigger problem if improvised hospitals were not well prepared.

Kon stated that 75 employees were removed from work at GAK Narodni Front - 46 positive to COVID-19, as well as those who were not tested or did not need to be tested, but were removed as a precaution.

He stated that all the positives were in contact with 150 people, who are completely healthy and under special supervision.

He said that this hospital still works as they found a way to do it, that is, fewer people work the same job.

"Testing objectively becomes the biggest problem, there has to be a way to overcome. From hospitals and clinics, materials are coming in and they are being processed, and there is an undetermined reason why this deadlock is happening. We are aware of the problem and we will try to solve it", Kon told reporters.

"Now that we have an ascending curve - it's very worrying. We cannot think in terms: it won't happen to me. There is a wave coming, it will not pass us by. I used to say all the time that I am a moderate optimist, and now I think that we will reach the peak with much less mortality, but that doesn't mean I'm right. It can't be known. We'll all have to wait and see. It's not yet time to prevent contact for 24 hours, as I said, it's the last resort. The deceased today had contacts with the infected three weeks ago. These are the consequences of contacts from three weeks ago", he noted.

"We haven't experienced this kind of epidemic since 1918", Kon said.

When asked if there would be a greater transfer of patients from clinics to temporary hospitals in the coming days, he said that it depends on the decisions of the physicians who monitor the condition of the patients.

He added that anyone who has “transitioned” from a medium to a patient with mild symptoms must be transferred to the improvised hospitals.

"This is something that is very well done, if we haven't done it, we would be in extremely serious trouble," Kon said.

He said that while there are problems, that does not mean that the system is not working, and that no childbirth can be delayed, or difficult conditions requiring emergency intervention, and all those cases will be taken care of.

"The system can always take care of such cases. Only medical procedures and surgeries that can be delayed are postponed”, Kon concluded.