Vucic's message to the public: No reason for panic

BELGRADE -- Serbia's President said there was no reason for panic following the first case of a man tested positive on coronavirus, as Serbia is not the epidemic hotspot

Vucic's message to the public: No reason for panic

BELGRADE -- Serbia's President said there was no reason for panic following the first case of a man tested positive on coronavirus, as Serbia is not the epidemic hotspot 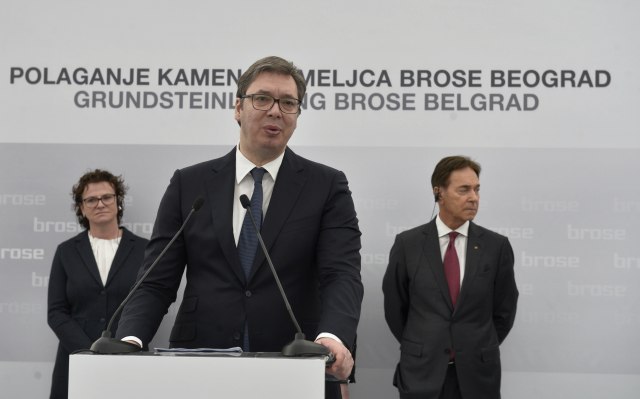 Serbian President Aleksandar Vucic says Serbian citizens should not worry as the news on the first case of coronavirus infection in Serbia has been confirmed.

Let us remind you that the first case of coronavirus was confirmed in Serbia this morning, and it is a man who is from Subotica and who was in Budapest.

"If you hadn't asked me, I don't know if I would have talked about it today, not because it's insignificant, but I think we said it all. The man who got infected was in Budapest. We are checking the whole family. Some family members remained in Budapest", he said.

According to him, all those who requested were tested in Serbia. "We act responsibly, whoever has shown that he has flu-like symptoms or something more severe has been tested. Not only is there no room to panic, it is important that all those in charge do their job," Vucic said.

He also said that Serbian citizens should bear in mind that our country is not the epidemic hotspot. "If there is an increase in the number of patients, the numbers will be five, ten, up to a dozen cases, certainly not hundreds, such as in Italy. Spring weather will soon come, but one should be careful, and we should wash our hands, that's what I talked about, and they laughed at me", he said.

Speaking about the proportions of the coronavirus effects, Vucic said that the worst day in the world since the outbreak was February 10, when 108 people died worldwide. According to Vucic, 26.283 people died of cancer that day, 24.200 of heart diseases, 4.300 of diabetes, while 28 times more people took their own lives.

He says that 25 times more people die each day from mosquito bites, which carry malaria. "With this information, I did not mean to say that coronavirus is insignificant and irrelevant, but that there is no need to panic", Vucic said.

He reiterated that the biggest problem is the economy, which has been already heavily affected by the coronavirus worldwide outburst. One of the examples is the automotive industry, as delays in the supply chain can cause problems in that industry.

"I am concerned if the construction works on Preljina-Pozega road will be delayed", Vucic said. He emphasized that he was certainly concerned about every human being and the health of the people. Vucic added he was worried about every individual that might be infected, but the most significant concern was about effects on the economy. "All stock markets are falling because there is no vaccine," Vucic said, adding that the "pharmaceutical mafia" would certainly not make the vaccine if it is unclear whether the virus would last until next year.

Vucic emphasized that Serbia will take all necessary tests, make all virus related information public and will not hide anything from citizens. "People need to be calm, and we should pray to God for the world economy to cope successfully and overcome this," Vucic said, adding that he will continue to do his job as he usual, without wearing a mask.