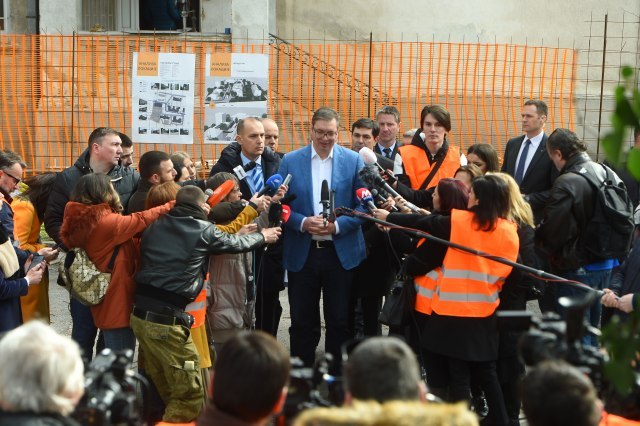 He also said that it is "very likely that the SNS will lose these elections."

In a statement to reporters after visiting the reconstruction works at the Infectious Disease Clinic in Belgrade, Vucic said the documentary was dedicated to him as a result of a campaign organized and paid for by "the united tycoons of Serbia", namely Dragan Djilas, Dragan Solak and Miroslav Miskovic, who he estimated would like to "return to power and plunder Serbia".

"I am proud of the fact how much I bother them and have been able to outsmart them in all their deals. This clearly indicates that they have decided to invest a lot of their stolen billions. That is why the elections will be the toughest for us and it is very likely that we will lose", he said, adding that he would respond to the documentary with putting more work and energy, to show that lies and edited video clips could not beat work and dedication.

He said that he sees nothing but outright hatred in this documentary and added that the film was prepared before the election campaign to raise discontent of people and to tell them that "Vucic is the devil and scum".

"I wondered how I deserved the four-hour documentary, with no mention of the unemployment rate being reduced from 26 to 9.5 percent. There was no mention of how low salaries and pensions were, and how they are now raised, how many highways and railways we had before, and how much do we have today. In addition to seeing that it was my fault that some mayor harassed the lady, even though we did our best to show that we did not agree and condemned it publicly. I was also guilty of setting someone's garage on fire, even though we arrested our mayor. I don't know what more to expect?", he said.

Speaking about claims by some opposition leaders that Serbia has major problems with migrants, Vucic said that was not true.

"Serbia has no problems with migrants. There was some small problems in Sid and Kanjiza, but otherwise there is no problem at all. Some people have a strong need to defame us in the world, to show that we also have modern fascists, but we will not allow them. They won't be able to tarnish Serbia's reputation abroad", Vucic concluded.