My regards to Mr. Carpenter

My regards to Mr. Carpenter 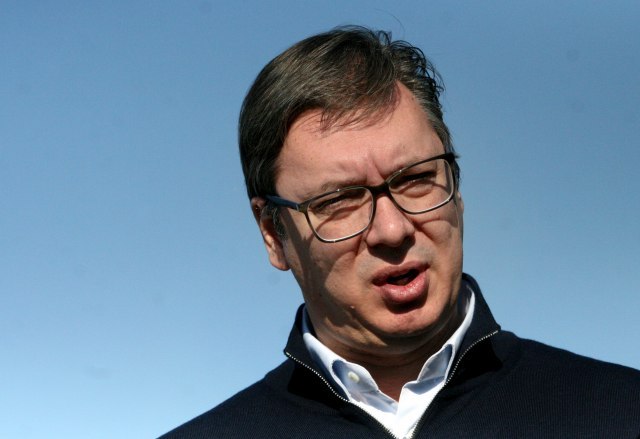 "We can discuss things that pertain to the economic progress, we have no problem with that, but we will not discuss the status until the fees are abolished. That is on hold, and we are waiting for the fees to be abolished", Vucic said when asked by Al Jazeera journalists in Munich, where he participates in the Munich Security Conference.

Vucic said it was ridiculous for him to talk about fees in the 21st century at all, because there must be free trade, stating that he expects the problem to be solved.

Asked if he would meet with representatives of the Pristina administration, Vucic recalled that Hashim Thaci had attended the signing of the railway document this morning and had seen some representatives of their delegation, but did not know if Albin Kurti would come to Munich in the afternoon.

"I don't know, you have to ask them. I'll be at the meeting at five o'clock," Vucic said. Asked what he expected from today's meetings, Vucic said that we should not expect too much.

"If we can lower the tension a bit, that is always good, and I think these are concrete steps. We will work on it quickly," Vucic said.

He said that a letter of intent was signed today about the railways and that it was important to open the rail line connecting Belgrade and Pristina, as well as the highway, after the fast-moving airline, as it was discussed six years ago with German Chancellor Angela Merkel.

Vucic also said that our side has done everything and that the first works on the road section through central Serbia will start in the autumn.

Asked how important the agreements and signed documents are, Vucic said that it is always better when talking than when there is no dialogue.

"Anything other than destabilization is good. All our heads are hot and it is easy to attack someone and get political points by criticizing another, I think it is important to preserve peace and stability," Vucic repeated.

He stated that economic numbers were good in Serbia, that the state had the highest growth in 2018 and 2019, not only in the region but also in Southeast Europe, that the low rate of public debt continued, but that cooperation should be continued and to open borders.

"Between us and Bosnia-Herzegovina and Montenegro alone, we lose at least two billion euros a year just because trucks are being halted at the borders for such a long time," Vucic said.

My best regards to Carpenter

Former Pentagon official Michael Carpenter's statement that Russia, through the Serbian Orthodox Church, is protecting its interests in Montenegro, Vucic says he wishes he had heard from Carpenter what rights Serbs in that country had.

"I would like to send my best regards to Mr. Carpenter. I wish I had heard from him whether Serbs, who have nearly 30 percent in Montenegro, have the same rights as Albanians in Macedonia", Vucic said.

Asked to comment on the fact that Ramush Haradinaj threatened Albin Kurti, if the latter abolished taxes of 100 percent on goods from Serbia, the President of Serbia briefly replied: "I don't care".

Vucic said that he would hear the views of Milorad Dodik and Zeljka Cvijanovic at a meeting in Belgrade tomorrow, regarding the situation in Bosnia-Herzegovina and stressed that they would always insist on maintaining peace and stability in that country.

In Munich, where he was answering questions from journalists at the break of the Munich Security Conference, Vucic told Al Jazeera that he had called Dodik and Cvijanovic for a meeting before the contentious decision of the Bosnia-Herzegovina's Constitutional Court on property.

After giving a statement to the media, President Vucic posted a photo on his official Instagram profile, which depicted large number of journalists and wrote: "Great interest of foreign media in Serbian views".