WASHINGTON DC -- U.S. Special Envoy for Belgrade-Pristina dialogue Richard Grenell says that despite the progress made, there is a long way to go in normalizing relations

WASHINGTON DC -- U.S. Special Envoy for Belgrade-Pristina dialogue Richard Grenell says that despite the progress made, there is a long way to go in normalizing relations 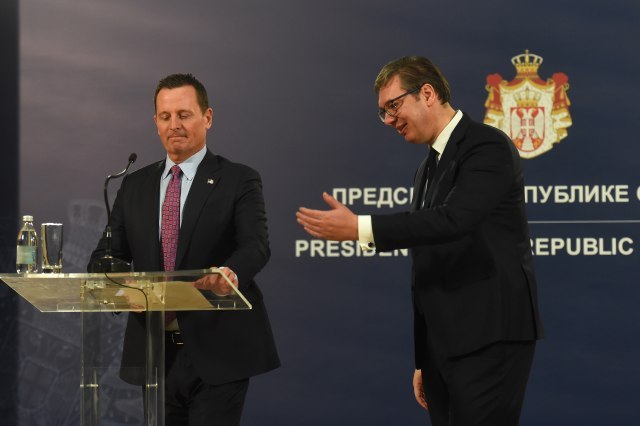 Speaking on a radio show hosted by U.S. radio journalist Hugh Hewitt about the announced rebuilding of Belgrade-Pristina airline and railway traffic, Grenell said yesterday that U.S. President Donald Trump's goal was to use the economy to raise political issues.

He estimated that "some small agreements" had been reached during the dialogue. "But I do look at the road ahead as still long in trying to get to normalization. But what we have is some progress", Grenell said. He said he was asked by President Trump to test the waters to see if Kosovo and Serbia and their respective leaders were interested in some sort of a deal, so he went there and started talking to them. "And what I found in talking to both sides and the private sector, the business community on both sides was my first meeting, I found that they just really wanted a normalization on the economic front", Grenell concluded.

So, the goal became how do they begin to move commerce to a more normal level. "And what we round was that air and rail and highway travel needed to be normalized. We needed to have the first flight from Pristina to Belgrade in 21 years. And so we started working on that, and we were able to get an agreement", Grenell noted.

"We also have an agreement on railway, and really being able to get the entire region more connected by railway, and that means commerce is flowing. It’s really the Trump goal of trying to use the economy to really drive forward political issues", Grenell said in a radio show.

Speaking about the war waged on Kosovo and Metohija, Grenell said that "this was the hot issue that the Clinton administration was working on, and NATO was involved with", adding that this conflict and a war shaped his understanding about the Balkans and even about Europe, "and so it’s humbling for me to be now there trying to push these parties together", Grenell concluded.

"I do think in a typical Donald Trump administration fashion, we are pushing the parties together, and trying to not have this kind of U.S.-centric idea that’s imported, you know, onto these countries, but to really say to president Vucic, President Thaci and the new prime minister in Kosovo, Albin Kurti, to say you know, do you all have the political will to move forward, create jobs for your young people, and really change the economic outlook? And I think the answer is yes, although the political situation is tough", Grenell said on the Hugh Hewitt radio show.