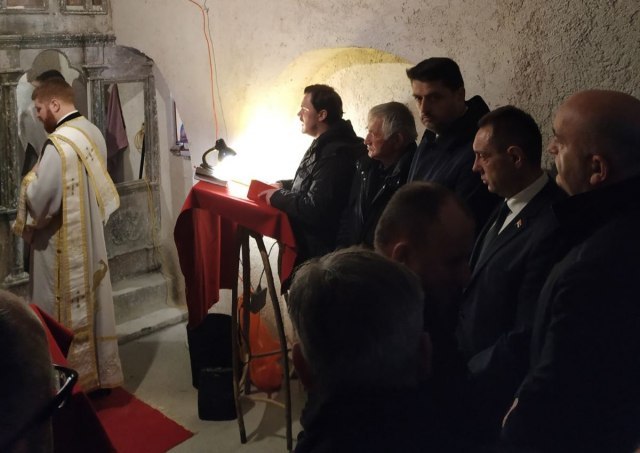 According to Sputnik, it happened on the eve of the travel to Rovca near Kolasin, where the Serbian defense minister was supposed to lay a wreath at Pavle Bulatovic's monument today.

Vulin is also expected to attend a liturgy at the Kostrikovaca Monastery.

Belgrade media reported that the Montenegrin authorities first issued a permit to the Ministry of Defense delegation Monday afternoon, implying that they are allowed to tome to Kolasin in uniforms.

However, during the evening, they called our ambassador to Podgorica, Vladimir Bozovic, for an emergency meeting, telling him that the permit for uniforms was no longer valid.

Vulin denied to Tanjug that speculations that a Serbian Army delegation had been halted at the border crossing with Montenegro, but confirmed that Montenegrin authorities did not allow a Serbian military delegation, headed by him, to enter Montenegro dressed in Serbian uniforms.

Vulin attended a holy liturgy at the Kostrikovaca Monastery in Rovci near Kolasin, marking the 20th anniversary of the assassination of Federal Minister of Defense of the Federal Republic of Yugoslavia Pavle Bulatovic.

The Holy Liturgy was served by the Metropolitan of the Montenegrin-coastal Amfilohije, and the liturgy was attended by members of the family of Pavle Bulatovic and numerous citizens.

Montenegrin Minister of Foreign Affairs Srdjan Darmanovic also confirmed that the Serbian delegation had been allowed to come to Montenegro on a non-state visit, without military uniforms.

Darmanovic reminded that the Ministry of Culture prescribes the use of military uniforms and that they are intended only when visiting monuments of national importance.

"Because Bulatovic monument is not on that list, the uniforms of another country are not an option under consideration", Darmanovic said at a news conference.

He added that the Embassy of Serbia was answered according to the lists, which, he said, could be confirmed at the Embassy. "We did not create a problem for a visit whose motives you can best assess", the foreign minister said.

Montenegrin media say there is no information that any official marking of the anniversary of the assassination of the former Federal Minister of Defense Pavle Bulatovic was carried out in Rovci since 2001.