"It is up to Serbia to decide" VIDEO

"It is up to Serbia to decide" VIDEO 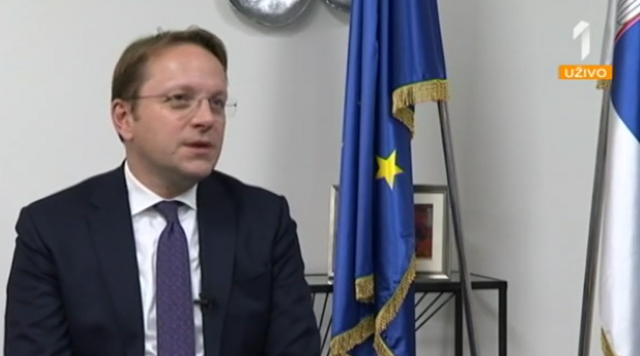 He believes that all actors in the Parliament need to be involved in implementing reforms on the European path.

"My message to the opposition is to create a common minimum on the meetings. I told them they should participate in the elections, be a part of the new parliament", Várhelyi told TV Prva, after meeting yesterday with representatives of the opposition Alliance for Serbia (SzS).

He added that he has seen some positive signs within inter-party dialogue, so there are positive tendencies and he believes this will continue.

He said that for his country, Hungary, it was very important during the accession process, that there was a common national minimum, including all the actors on the political scene agreed on the reforms needed for the EU membership.

Without that, he added, it is very difficult to achieve EU accession.

"Ruling majorities come and go, but the challenge is always the same - reforms must be implemented", Várhelyi told Prva TV.

Speaking about EU's new accession methodology, Várhelyi says that it is not purposefully designed for Serbia, but that Serbia can join if it wants. It helps strengthen European influence in the region, but also helps the region in general.

"It is up to Serbia to decide," he said, adding that many elements must be taken into account, because Serbia is already in negotiation process.

"It's a more complex decision. The Serbian government will have to make a choice. In the new methodology, I personally find it attractive that reforms and accession negotiations can be accelerated for a country that is already negotiating," he said.

"It's a rather complex decision. Serbian Government will have to make a choice. In the new methodology, I personally find it attractive that reforms and accession negotiations can be accelerated for a country that is already negotiating", he said.

The new methodology was introduced due to serious objections raised by many members, and the two main priorities are to strengthen EU's credibility and presence in the Western Balkans.

"You cannot become an EU member without meeting the clear Copenhagen criteria, you must have a functioning market economy, the other criteria is that you have good neighborly relations with all partners," he said.

Asked what good neighborly relations mean for the EU regarding Kosovo, he says "a long-term peaceful solution."

It is up to the actors to decide and formulate a plan, Várhelyi says, adding that he is ready to help.

"Without Serbia and Kosovo sitting at the same table and formulating solutions, this will not happen. I understand the sensitivity of the issue and that Kosovo imposed taxes are blocking the start of negotiations," he said.

Without resolving Kosovo issue, there will be no EU accession for Serbia, Várhelyi concluded.