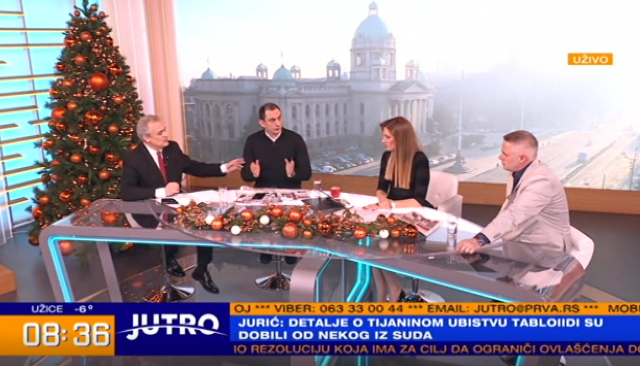 Namely, some of the tabloids have published front page stories of the arrested Ninoslav Jovanovic depicting torturing a kidnapped 12-year-old girl for days.

One tabloid had apologized to the girl, her family and the public, but the question certainly arises - where is the red line, why Ministry's reaction was missing, why it hadn't reacted earlier when the front pages published the details of the investigation for days, as well as photos of the girl found, how it happened that the information leaked from the prosecution and police?

"The ministry reacted very early and in a timely manner. Namely, we reacted on the day when the girl was found, and I, as secretary of state, asked all the media to pay full attention to the vocabulary and the way of reporting as we are talking about a minor who is in sensitive years and whose life has just begun", Aleksandar Gajovic, Secretary of State at the Ministry of Culture and Information, told Prva TV.

He said that the ministry reacted on a second occasion when the media reporting turned towards sensationalism.

"Srpski Telegraf" is the only tabloid to have apologized for its front page yesterday, and its editor-in-chief Milan Ladjevic said that they had published details of Ninoslav Jovanovic's testimony "with the best of intent".

"First of all, we had well-intentioned criticism that it could upset family and part of the public, and we saw that part of the public was upset and it was fair to apologize. We did not intend to hurt the dignity of Monika and her family, her dignity was hurt by the monster and the judge who released the monster earlier. The media only offered information, a confession of the crime, so that it cannot turn out that he had just held her hostage. You know, various stories appear, it's not the man who abducted her, that he did not rape and abuse her. "We did it out of the best of our intentions", he said, and showed Western media reports on the Fritzl case, containing many details of the case as well.

"What the Ministry says in a statement, Minister Vukosavljevic, this is simply a vocabulary that does not fit the ministry. Media vultures, shamelessness, immorality - what the hell are you talking about, man? You should be ashamed of yourself. Where were you when they threatened to kill Vucic with a sniper? This is really endangering, it should be processed by the prosecution. He does not understand nor read the laws, he doesn't have a clue. The minister is either stupid or has some other goals on his agenda", Ladjevic concluded.

"I don't think that this should be the topic of the discussion", Gajovic said, adding: "The topic is much sadder, tabloids have been crossing that red line of good reporting lately. It's good that "Srpski Telegraf" apologized and in some way admitted the mistake. The motive is not important. It is important that we filed a misdemeanor charge against three tabloids that violated several articles of the Law on Information and Media. This is what the Ministry was obliged to do".

Igor Juric, the founder of "Tijana Juric" Foundation, posted yesterday on Twitter that when Tijana was killed, her sister could read for days on the front pages how much her sister had suffered before she died. He added that he begged the newsrooms to stop writing about it primarily because of Tijana's sister, but they did not listen.

"When it all ended in Tijana's case, her mother got sick after a text in the newspaper. I saw the entire indictment in court, while Tijana's mother and sister only knew what they saw in the media. I will never forget the cover of that tabloid. We were walking down the street and it was written "Tijana" all over the front page and blood was dripping down the letters and below were some of the details from the indictment, someone just gave it to the press, this is also the case with a photo of a kidnapped girl in an ambulance car, I would like to know who delivers that kind of information to the press. Who cares how many times that girl was raped, who cares in what way my child was killed", Juric said.

A fierce debate continued over the publication of a photo of the child after she was found.