BELGRADE -- Today, the section of the Milos the Great highway from Surcin to Obrenovac opens, the ceremony is attended by Serbian President Aleksandar Vucic

BELGRADE -- Today, the section of the Milos the Great highway from Surcin to Obrenovac opens, the ceremony is attended by Serbian President Aleksandar Vucic 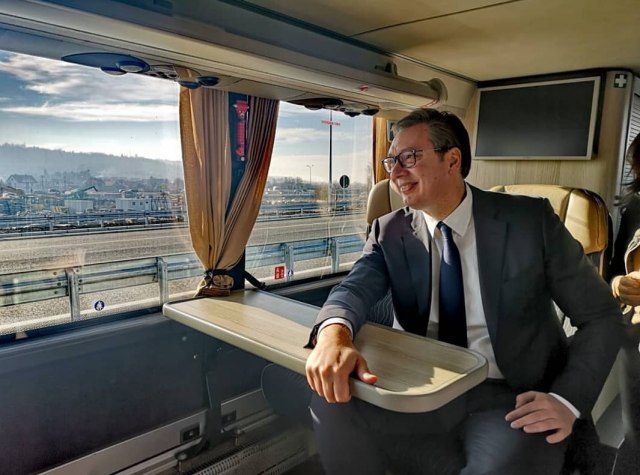 This road section is 17.6 kilometers long and will connect the entire route from Belgrade to Cacak by 120 kilometers.

By finalizing that part of the Milos the Great highway, the travel from Belgrade to Cacak will take an hour ride.

"The Chinese engineers did a fantastic job," Vucic said, adding that he had received a promise from the Chinese contractor that the road would be completed in Pozega in two years, so we would no longer have to go through the Ovcar-Kablar Gorge.

"In exactly two years, we will go to Pozega by highway, so we will avoid torturing ourselves by driving through the Ovcara-Kablar Gorge, Lucani will flourish, and Cacak will become the center of the world", Aleksandar Vucic said.

"We have money for all of this, and we also repay the favourable loans we receive from China on time. That is why we do not have an increase in public debt as some countries in the region. Structural reforms are something that we need to take in order to be the first in Europe when it comes to growth rate", the president said.

The new highway has a total of 12 bridge structures, ranging from 11 to 1,581 meters, as well as two large loops Surcin and Obrenovac. The largest bridge near Obrenovac, 1,581 meters long and 29 meters wide, at the mouth of Kolubara in the Sava River, was constructed with 27 poles and 33 spans, and 88,000 cubic meters of concrete and more than 11,500 tons of reinforcement were installed. In addition, more than 2.7 million cubic meters of sand and about 190,000 tonnes of asphalt were installed in the highway from Surcin to Obrenovac.

"We have money for all this, we get favourable loans from the Chinese and we repay them without any problems", Serbian president said.

President said that our results are slightly weaker than Tito's, but that we will reach his achievements in a few years.

"We are looking at what to do with the Belgrade-Nis line", Serbian President said, referring to railway projects, adding that he would like Nis to have the same status as Novi Sad in terms of high-speed rail.

"Seven years ago, we had, on Corridor 10 alone, 34 million vehicles, today we have 60 million, and next year we will reach 75 million vehicles," he says, adding that foreigners are increasingly using our country as a transit country, which attracts investors.

Vucic added that together with Prime Minister Brnabic, he would present a strong reform agenda to citizens of Serbia on December 28, in order to achieve a six percent growth rate.

"It will be a plan with a very strong reform agenda for growth of six percent and more by 2025. We want to be the first in Europe when it comes to the rate of economic growth", President concluded.

"Wages have increased but we are still dissatisfied," he says, adding that the results are being seen, but that we now need reforms that will not burden the people so much.

"We've been dreaming of this for decades"

"Many thanks to the hardworking construction workers who have done a great job for our country, for their fighting spirit, and I want to congratulate all Serbian citizens on the opening of Surcin Obrenovac road section. We will travel from Belgrade to Cacak in 60 minutes, that is something we have been dreaming of for decades", the President posted on his Instagram account.