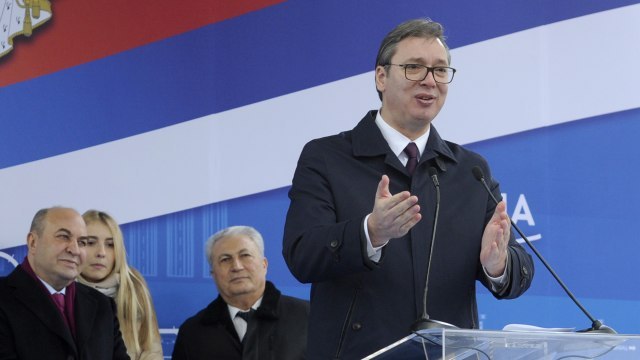 Commercial contract for the construction of the Ruma-Sabac highwayand the Sabac-Loznica expressway was signed on November 19 with the Azerbaijani company Azvirt. Total length of this road is 77 kilometers, while the estimated value of the project amounts to 467.5 million euros.

The construction of the Ruma-Sabac highway and the Sabac-Loznica expressway is one of the priority projects in road transport, considering its importance in connecting and developing Srem, Macva and Western Serbia and Vojvodina, as new road will connect Macva and Western Serbia with strategic Corridor 10, which will significantly affect new investments in this part of Serbia.

"I am particularly proud that in a single day we sign a contract for the Moravian Corridor, and we open works on the new Ruma-Sabac-Loznica highway. This speaks in itself how much Serbia is changing, how much progress we've made, and to what extent we managed to straighten out public finances", Vucic said.

"Road builders don't hate anyone. That's our policy. We want a decent Serbia. We will not stop here. We are looking to the future", Vucic said.

President Vucic told the residents of this area that they would get a fast and modern highway that would bring even more investors and jobs for the people who live here.
"Azvirt is one awesome company, a great company, no problem with them! Brothers, you will have a lot more work to do in Serbia", Vucic said.

"Today is a big day for Serbia. In addition to signing the contract for the Moravian Corridor this morning, today we are starting to build this highway. Serbia does not have time to waste. We have completed Corridor 10, we have completed about 100 kilometers of highway 'Milos the Great', in a day or two, we will open a road section from Obrenovac to Surcin", Mihajlovic said.

Azvirt company representative Karaman Ahmedov congratulated the Government of Serbia on this project, noting that this road would present an "artery" thanks to which the development of the surrounding cities, as well as the entire region, would be accelerated.

"This time it will encourage the development of private business not only in Serbia but also in Bosnia and Herzegovina", Ahmedov said.

The route of the future state road was determined on the basis of the general project, the plan of the special purpose area and the coordination with the representatives of local self-government.

Azerbaijan's Ambassador Hasanov said that in 20 years of his diplomatic career, he has not experienced one country sign two major contracts in a single day. He conveyed to President Vucic and the people of Serbia the warmest greetings of President of Azerbaijan Ilham Aliyev.