Vucic: If that's okay with them, all right and thank you, if not - thank you, anyway

Vucic: If that's okay with them, all right and thank you, if not - thank you, anyway 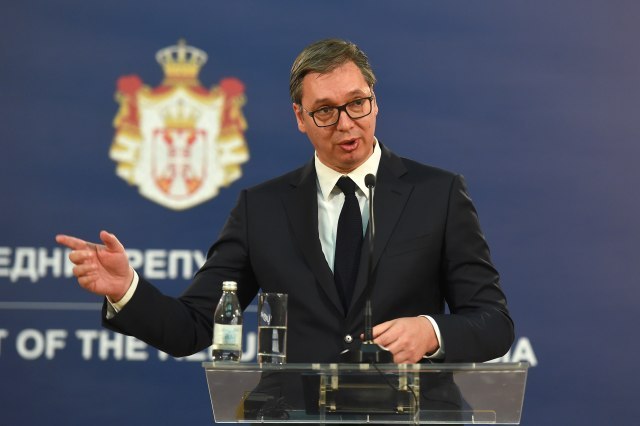 Vucic also said that he wants a clearer picture of what EU countries foresee as the future of the Western Balkans.

"It is crucial to me that Serbia continues its European path. We have 67 percent trade exchange with EU", he explained.

He said he had good discussions with European Parliament officials on important topics, from Kosovo and Metohija, through the economic situation in the country, which he added was commendable, as well as Serbia's economic progress.

"We will have higher economic growth than forecast and expect it to be 3.9 or 4 percent. This would make us one of the European countries with the largest growth. At the same time, we are reducing the public debt to GDP ratio. We have reduced the unemployment rate below 10 percent, bringing us closer to EU countries", he said.

Vucic pointed out that a compromise solution for Kosovo and Metohija is the point where we are facing have many problems, so he is not certain how things will go in the future - but we are always ready to explore this issue.

Other issues also covered in the discussion were: the state of human rights, democracy, media freedoms and everything else that is in the interest of the citizens of Serbia, Vucic said, adding that he was critical of himself and of us, and that he understood well certain comments made by the guests, but also pointed to what he really thinks.

"I have spoken openly and expressed my views, which I normally present in the domestic public, as well. We all have to create the best possible environment for the elections in Serbia, to be better than 2012, when we had only one media outlet to which we, as the opposition, could go out. Today, the situation is different, but it can be further improved", he said.

Vucic expressed his belief that the work, effort, and results of that work will always win, rather than how many times somebody will appear on a TV show or in a newspaper.

He thanked Bilcik for coming to Serbia for the second time in a short term, continuing that Weber was a great friend of the whole region.

"I would like to take this opportunity to thank him, on behalf of Serbia and as a member of the EPP bloc, for his outstanding contribution both to our success throughout Europe, but also for his dedication to the advancement of the European idea, including Western Balkan region. Thank you for your hard work and dedication, as without your support, the new European Commission could not have been composed which speaks in itself about your importance", Vucic said.

Serbian President Aleksandar Vucic said today that Serbia has four chapters ready for opening in the accession negotiations with the EU, and that it is realistic that one chapter will be opened.

"I don't know if the European Union is going to open one, maybe none, maybe sometimes two chapters, and we have four chapters ready to open, but we are not at that level to open those four, so it will be from zero to two, realistically - one, that's what we deserved", said Vucic, with a touch of irony, answering questions from journalists at a joint conference with European People's Party (EPP) leader Manfred Weber.

He stated that with this additional chapter opened, Serbia will "jump" from 17 so far open chapters to 18, which, as the president noted, is "of historic importance to our country".

He has repeatedly said that Serbia has done its job, but that it is not up to us, and that the EU is making a political assessment and deciding whether and how many chapters and at what speed it will open in negotiations with our country.

"If Webber were to decide, I know that they would want Serbian in EU because they had a clear vision of Europe, and since it is not up to him to decide, others will be asked, so we will monitor their compliance and look at what paths are being taken, to fulfill our obligations and I count that in three years, when they open a total of four chapters for us, we will already cross that number of 20 opened chapters and that will be of great importance for our country", Vucic concluded.