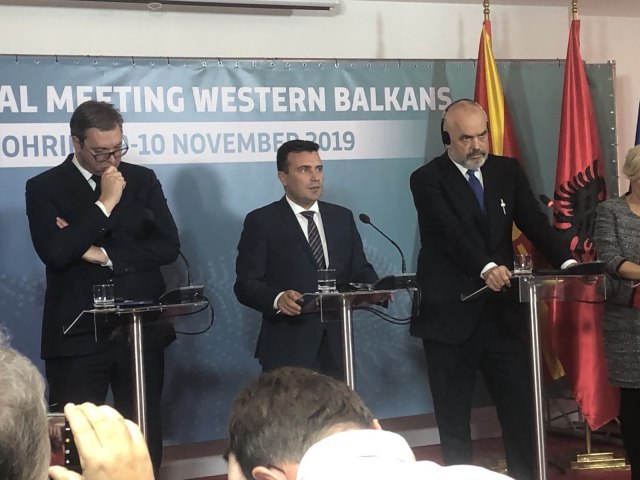 Serbian President Aleksandar Vucic, reached the agreement on how the so-called "mini Schengen" will look like with Zoran Zaev and Edi Rama, the prime ministers of North Macedonia and Albania.

The implementation of this agreement will contribute to the development and economic growth of the three countries, as well as other countries in the Western Balkans. Today's meetings were also attended by BiH Council of Ministers Chairman Denis Zvizdic and Montenegrin Economy Minister Dragica Sekulic.

"Today we are going to talk about a dream, the Balkans of the 21st century. We will improve living conditions, help young people stay here, and with this agreement we will find a way to attract foreign investors. We have opened this initiative, or action plan. This Balkans will be a different, better place”, Zaev said, inviting other Balkan countries to join this initiative.

According to him, borders will only be crossed with an ID card, trucks will not wait for hours at the border crossings. Zaev added that the ultimate goal of the regional initiative is the mutual recognition of all documents, including the documents of food agencies, college degrees and other state documents.

"This is a very important initiative for Serbia. I am proud that in a short time we have been able to agree on something that will mean a lot to our citizens", Vucic said.

"When we put in place border inspections, a sum amounting to 129 million euros will be saved at individual crossings between countries, not to mention how much easier it is for a tomato grower in northern or southern Albania to export these easily perishable goods to Serbia and will be in a position to make plans for better production facilities. For investors, it would be great to be able to exchange engineers and workers, in two years you will be able to see investment growth in all three countries. You will have free movement. Before the end of the year, we will be able to go to Albania only with an ID card", Vucic emphasized.

He said that what was agreed in Ohrid would not be popular in Serbia, but that he doesn't care.

"Many people do not understand this today, I see that Rama is under tremendous pressure. During the election campaign, my opponents attacked me of building a highway for Greater Albania, but they received 11 times fewer votes than me. I am proud of the agreement between North Macedonia and Albania. Maybe we will fail with this initiative, but it will certainly be the future. There are no ‘Yugoslavias’ but only a better and more quality life for our citizens", Vucic said. He also referred to the arrival of foreign tourists, who would be able to travel freely between these countries.

Albanian Prime Minister Edi Rama said it was not the idea to divide the Western Balkans, which is already fragmented, but to cover all Balkan countries with this initiative.

"Our declaration, the agreement at the summit was written down and adopted in the six countries at the meetings we had carried out. The key feature is that this document is an internal desire, not patronized externally", Rama said.

He announced that the next meeting would be held in Durres on December 21st, with EU foreign policy representative Joseph Borrell attending the summit.

Chairman of the Council of Ministers of Bosnia and Herzegovina, Denis Zvizdic, said that Bosnia-Herzegovina still does not have a defined position on this regional initiative.

"Bosnia-Herzegovina will adopt its position in accordance with the procedures after a serious analysis of institutions, business community and experts. We have received some guarantees that the initiative does not attempt to substitute for Euro-integration or derogate from existing regional agreements such as CEFTA", Zvizdic said, adding that Euro-integration remains the "primary focus" of Bosnia-Herzegovina.

He stated that it is necessary for Bosnian institutions to be formally aware of the "content and expected benefits" of the initiative and models for removing customs barriers.

Zvidic also said that it is good that meetings of regional leaders are no longer held only in European capitals but also in the region itself. According to him, it is necessary to work on economic cooperation in the region as it contributes to political cooperation.

Montenegrin Economy Minister Dragica Sekulic said that Montenegro would consider an initiative on the so-called "Mini Schengen", depending on to what extent such a move could bring benefit to the country.

"Every initiative related to the economic cohesion of the region in Montenegro went through an analysis - whether it accelerates the country's European integration and what benefits it brings to citizens and the economy. So, this initiative will also be analyzed at the level of institutions and experts, so if proven to meet both conditions, we will discuss", Sekulic concluded, pointing out that the opportunity for doing this will be presented in Durres in December.

With less "paperwork" across the border

These are the concrete measures on free movement of people, goods, services and capital among the three countries, agreed upon in Ohrid:

- Travel of citizens of Serbia, North Macedonia and Albania within the territories of the three countries with ID card only, to Serbia and Albania starting at the end of the year;

- "Mini Schengen" opens the possibility for foreigners, so the citizens of the initiative countries could travel without additional visas. This will increase the number of foreign tourists and enable the establishment of joint tourist offers and routes;

- Joint work permits and recognition of qualifications and diplomas, without additional procedures, which would provide the possibility of labor movement, which would in turn increase the availability of workforce and thus the attractiveness of the whole region for foreign investors;

- Introducing 24-hour working time for all border inspection services, with a focus on phytosanitary and veterinary inspection, which will shorten the waiting time for goods trucks and the free movement of goods will have multiple effects and increase the competitiveness of the entire region with about 12 million inhabitants;

- Unique "package" of documentation required for transit of goods, with an emphasis on introducing a system with as little "paper" as would be consistent with the digital development strategy;

- Amendments to the laws in the field of the capital market, tax and financial system in all three countries, in order to create conditions for smooth flow of capital;

- Defining its own rules in many areas, in order to improve the attractiveness of the three countries and cooperation, and this initiative can thus become the most important political initiative in the 21st century.

-This is part of the measures that will be defined precisely in the Action Plan, until the next initiative meeting in Durres, Albania, at the end of December takes place.

The initiative is reportedly open to all countries in the region.