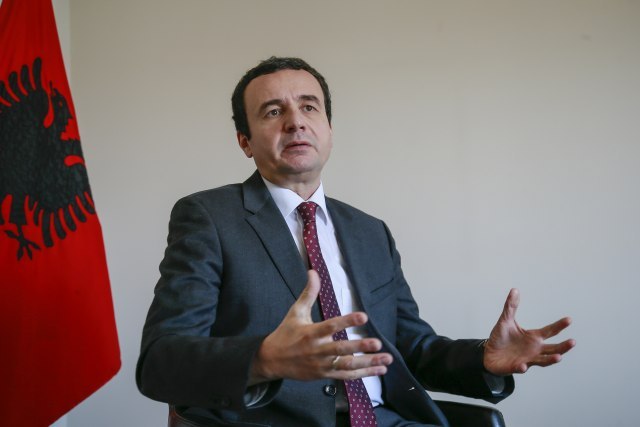 His plan is also to establish reciprocity with Serbia. Kurti also added for the weekly "NIN" that this is a normal way of bilateral relations.

Kurti said that they have "to let Serbian leadership know" that Serbia’s diplomatic efforts to prevent Kosovo from joining international organizations can’t lead to new negotiations, "let alone an agreement or truce"…

"Serbia has to take responsibility and we will ask for the support of our international partners, EU and USA", Kurti said, adding that "Kosovo needs an official statement from Serbia that it won’t prevent it from joining international organizations".

Speaking about the form of negotiations, Kurti said that the new negotiations should include three principles, namely that "there is no agreement without dialogue, that there is no dialogue with maps around the territories and that maps are taken care of by border demarcation experts, not politicians."

"I am willing to hear civil rights demands but not Belgrade’s appetite for territories”, Kurti pointed out, calling Thaci's negotiations on territory swap with President of Serbia unconstitutional, as only the government and Prime Minister are entitled to conduct such negotiations and are responsible to the Parliament.

He said the Community of Serb Municipalities (CSM) is “just words on paper” because the Kosovo Constitutional Court ruled in December 2015 that it was in violation of the constitution. “None of the Kosovo Serbs objected because of that decision, only Belgrade did,” Kurti said.

He stressed that the Constitution of Kosovo envisages that minority ministers get the approval from the representatives of their minority in the Parliament. "Which in this case may be the Serb List, but it does not necessarily mean that it has to be their member at all costs," Kurti told NIN.