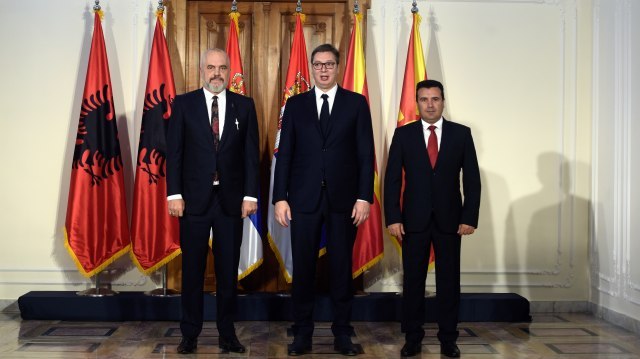 The main issue for discussion of this trilateral meeting is establishing "mini Schengen" with the aim of improving the links of the regional markets, enabling free flow of goods, people, services and capital in the market of 20 million people.

The meeting is scheduled to last two hours, after which three officials will address the media. Today, as Tanjug learns, a declaration of intent will be signed.

Zaev and Rama arrived to Serbia yesterday, and last night they walked through the streets of Novi Sad with their hosts, President Vucic and Serbian Prime Minister Ana Brnabic. On that occasion, Vucic said that for our three countries, but also for the others, this meeting is of crucial importance.

"I am happy that we have started taking care of ourselves and that we do not need a tutor, that in this way, and in a relaxing atmosphere with the music in Novi Sad, we can agree on a better future for our workers, our farmers, especially for young people, to stay in our countries", Vucic said.

Vucic, Rama and Zaev already discussed the meeting informally during the UN General Assembly in New York in September, and the Serbian President then announced that plans would be made in Novi Sad to connect markets in the region, or to create a kind of so called "mini Schengen" regime, visa-free regime among the regional countries.

Economists estimate that by establishing a "mini Schengen" in the Western Balkans, companies from across the region would gain a larger regional, common market with nearly 20 million consumers. The initiative was welcomed by the regional chambers of all Western Balkan countries, which bring together more than 350,000 companies.