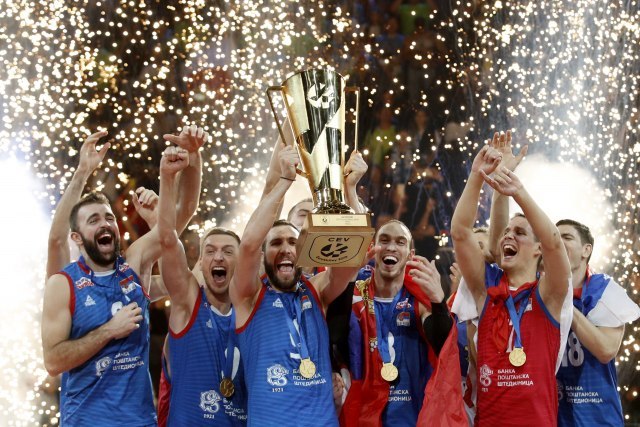 Players selected by national coach Slobodan Kovac played wonderfully and triumphed on every match on the Championship, keeping their best performance for the finals.

After Serbia's Women's National Volleyball team won gold, men's national team did the same, and they knew how to celebrate.

Nemanja Petric scored a point to bring the match point, then, in a manner of a real captain, placed the ace and a big celebration followed, cheered by a small crowd in Paris.

Shortly afterwards, it was time to leave Bercy Hall and board the bus waiting for them to reach the hotel from where they left for Belgrade.

Their celebration was no different in the bus than in the sports arena or locker room. They celebrated with a song and the cameraman of the Volleyball Federation of Serbia recorded the words of the song: "Oh, Kosovo, Kosovo, my beloved land", with a description on the official Instagram profile: "Dedication".

Just to reiterate, special welcoming ceremony for the European Volleyball Champions is scheduled for Monday, at 8 pm, on the balcony of the Belgrade City Assembly.