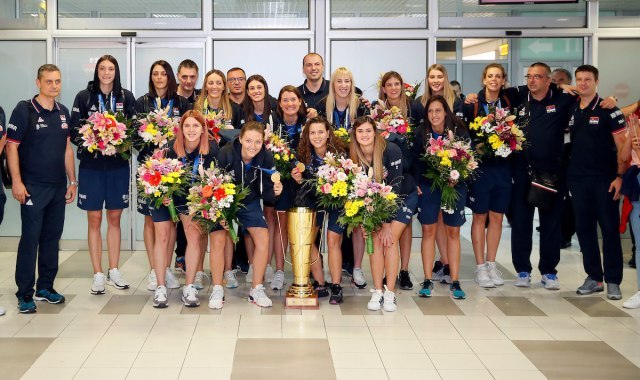 Volleyball players and professional staff members individually went out to the balcony, being cheered by the gathered fans. After introducing the team, the national anthem of Serbia was intoned, which the national team members and fans sang together. Fans applauded the tournament's best player, Tijana Boskovic, shouting "MVP".

"I am very glad that for the third year in a row we have the opportunity to be here with you. We felt your support and it was an additional motive for us to be even stronger. Thank you very much", said Boskovic.

Serbia's selection captain Maja Ognjenovic said that "finding the right words and reaching the fans is much harder than playing the finals in front of 14,000 rival fans". "Thanks for the love and support! See you next year at this same venue on the same occasion (the Olympics)".

Serbia's middle blocker Stefana Veljkovic had a message for the gathered fans.

"Thanks you for coming again to greet us. Each time is a special feeling and a great emotion, I hope that next year we will all be here to celebrate Olympic gold," Veljkovic said.