PM on killing of RTS staff: Barbaric act, no justification

NATO's bombing 20 years ago of Serbia's public broadcaster RTS, killing 16 employees, was a barbaric act for which there is no justification.

PM on killing of RTS staff: Barbaric act, no justification

NATO's bombing 20 years ago of Serbia's public broadcaster RTS, killing 16 employees, was a barbaric act for which there is no justification. 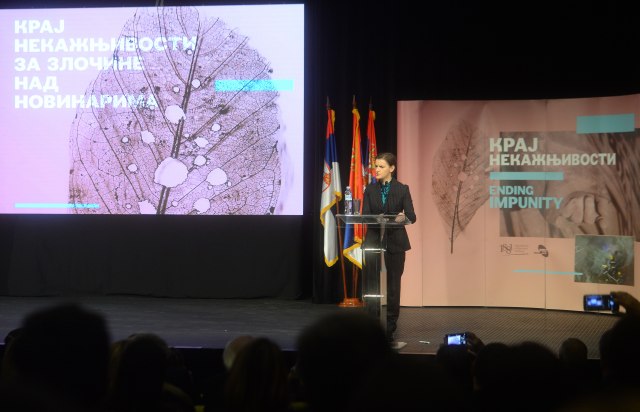 At the event, organized by the Association of Journalists of Serbia (UNS) and the Radio Television of Serbia (RTS), on the occasion of the 20th anniversary of the bombing of the RTS, Brnabic pointed out that this is a brutal, uncivilized murder of which most of those countries which today talk about the freedom of the media should be ashamed.

They responded to a television broadcast with bombs, the prime minister said, adding that, unfortunately, there will never be a trial for those who ordered tis killing, as well as those who bombed the building of the RTS and killed innocent people at their workplace.

According to her, our remembrance and preventing this event from fading into oblivion is a kind of verdict, not an official and lawful one, but the one that says that we know what happened to us and who did it.

I also experience this gathering as a cry of one nation, one profession, for justice. As a necessity for the world to be fair, regardless of power, size and politics, to prove nevertheless that justice is needed and that there are those who will not cease to seek it. And, no matter how strong and powerful you are, some things are simply unacceptable, and the standards that apply to the powerful should be valid for all the others, the Prime Minister said.

Serbia at least convicted someone for not having evacuated employees from the building, she at least tried to find a part of fault in herself, in her mistakes and paranoia of a difficult and bad time, Brnabic noted.

Expecting other, official structures to do the same today is not realistic. But we will continue to remind ourselves and all the others, that a crime is a crime, that a murder is a murder, regardless of who committed it and with what motives, she stressed.