Serbian students have taken the opportunity to "respond" to US Ambassador Kyle Scott showing a map of Serbia missing Kosovo and Metohija (KiM).

Serbian students have taken the opportunity to "respond" to US Ambassador Kyle Scott showing a map of Serbia missing Kosovo and Metohija (KiM). 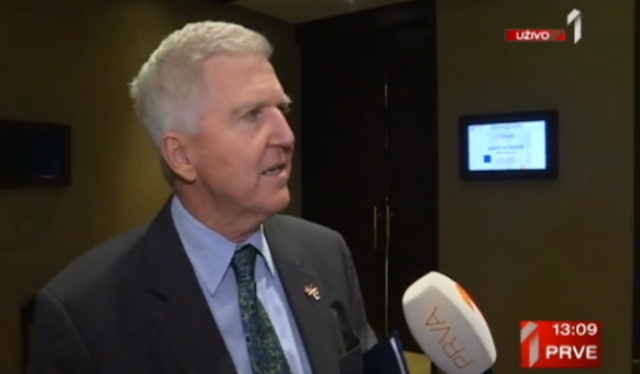 On Monday, several dozen Kragujevac, central Serbia students and citizens attended Scott's lecture at the Faculty of Law at the University of Kragujevac.

Alo.rs is reporting that after the lecture, Nenad Milisavljevic, a member of the Zavetnici Movement in Kragujevac, stepped up to comment on Scott's statement that the US was "respecting its Constitution" and noting that recently in Apatin, he showed a map of Serbia without Kosovo - i.e., a violation of Serbia's Constitution.

"I have brought with me a geographic map. To show you that our territory and our country does not exist without Kosovo and Metohija)," Milisavljevic said.

At the end of the lecture, the students also presented the US ambassador with a photo of Milica Rakic - a toddler killed by NATO in 1999 in her home in a Belgrade suburb - along with other images of destroyed Serbian infrastructure during the NATO aggression against their country 20 years ago.

On April 11, Scott gave a lecture in the Apatin elementary where he showed the map that the US embassy later told Tanjug was "in official use in the United States." Furthermore, they said the US stance on Kosovo was "known" - i.e., that country recognizes the unilateral declaration of independence that ethnic Albanians made over 11 years ago, which Serbia rejects.